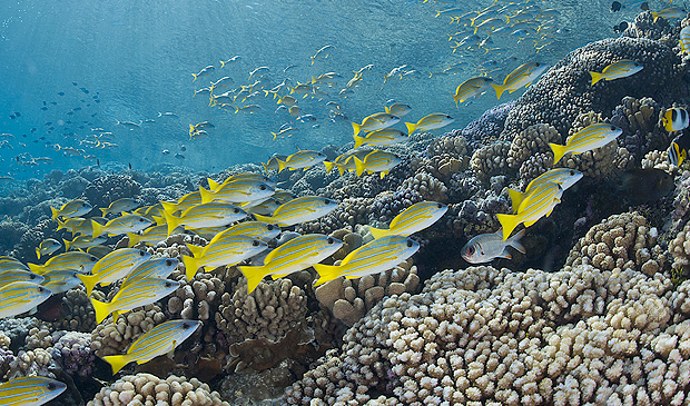 MIAMI – February 25, 2013 — In a study published today in Nature Climate Change researchers used the latest emissions scenarios and climate models to show how varying levels of carbon emissions are likely to result in more frequent and severe coral bleaching events.

Large-scale ‘mass’ bleaching events on coral reefs are caused by higher-than-normal sea temperatures. High temperatures make light toxic to the algae that reside within the corals. The algae, called ‘zooxanthellae’, provide food and give corals their bright colors. When the algae are expelled or retained but in low densities, the corals can starve and eventually die. Bleaching events caused a reported 16 percent loss of the world’s coral reefs in 1998 according to the Global Coral Reef Monitoring Network.

If carbon emissions stay on the current path most of the world’s coral reefs (74 percent) are projected to experience coral bleaching conditions annually by 2045, results of the study show. The study used climate model ensembles from the upcoming Fifth Assessment Report of the Intergovernmental Panel on Climate Change (IPCC).

Around a quarter of coral reefs are likely to experience bleaching events annually five or more years earlier than the median year, and these reefs in northwestern Australia, Papau New Guinea, and some equatorial Pacific islands like Tokelau, may require urgent attention, researchers warn.

“Coral reefs in parts of the western Indian Ocean, French Polynesia and the southern Great Barrier Reef, have been identified as temporary refugia from rising sea surface temperatures,” said Ruben van Hooidonk, Ph.D., from the Cooperative Institute for Marine and Atmospheric Studies (CIMAS) at the University of Miami and NOAA’s Atlantic Oceanographic and Meteorological Laboratory. “These locations are not projected to experience bleaching events annually until five or more years later than the median year of 2040, with one reef location in the Austral Islands of French Polynesia protected from the onset of annual coral bleaching conditions until 2056.”

The findings emphasize that without significant reductions in emissions most coral reefs are at risk, according to the study. A reduction of carbon emissions would delay annual bleaching events more than two decades in nearly a quarter (23 percent) of the world’s reef areas, the research shows.

“Our projections indicate that nearly all coral reef locations would experience annual bleaching later than 2040 under scenarios with lower greenhouse gas emissions.” said Jeffrey Maynard, Ph.D., from the Centre de Recherches Insulaires et Observatoire de l’Environnement (CRIOBE) in Moorea, French Polynesia. “For 394 reef locations (of 1707 used in the study) this amounts to at least two more decades in which some reefs might conceivably be able to improve their capacity to adapt to the projected changes.”

“More so than any result to date, this highlights and quantifies the potential benefits for reefs of reducing emissions in terms of reduced exposure to stressful reef temperatures.”

“This study represents the most up-to-date understanding of spatial variability in the effects of rising temperatures on coral reefs on a global scale,” said researcher Serge Planes, Ph.D., also from the French research institute CRIOBE in French Polynesia.

The researchers involved in the study all concur that projections that combine the threats posed to reefs by increases in sea temperature and ocean acidification will further resolve where temporary refugia may exist.

(via Rosenstiel School of Marine and Atmospheric Science)