Seagrass to the Rescue!

In some interesting research, a UC Davis research team has concluded that planting multiple species of Seagrass during reef restoration efforts can actually improve restorative conditions for reefs all around the world! “Seagrass beds are important habitats for fisheries species, for protecting shorelines from storm damage, and they provide livelihoods for many millions of humans around the world,” said Susan Williams, a professor in the UC Davis Department of Evolution and Ecology and the UC Davis Bodega Marine Laboratory. 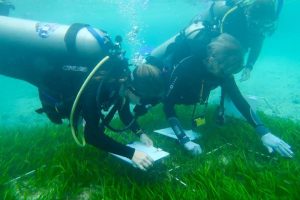 From the Turtle Grass (Thalassia testudinum) off the Florida Coast to the Sickle-Leaved seagrass (Thalassodendron ciliates) that covers the reef crests of Bali, seagrass provides breeding grounds for fish and nourishment for both sedentary inhabitants and pelagic visitors. Seagrass beds act as “ecosystem engineers” and are found in both monospecific beds and very diverse accumulations in places like Indonesia, yet these ecosystems are  “being lost at a rate of a football field’s area every half-hour, which threatens these important functions” according to Susan and her colleagues. The Coral Triangle is a beacon of biodiversity and its seagrass beds have been monitored and studied for years, so to conduct their research Susan and her team transplanted 6 common species of seagrass in 4 different distribution models (monoculture, two species, three species, and four species) and analyzed how well they did over a one year duration of time. Finding that monocultures did not do as well as diverse plantings did, Susan and her team concluded that diversity of seagrasses improved both the initial transplanting uptake and overall growth rates of their experimental transplant areas. Restoration efforts for the Coral Triangle are extremely intense and this study aids in the notion that biodiversity within ecosystem restoration is the foundation to success. “We demonstrated we could improve seagrass restoration success by planting a mix of species, and not just a single species, which has been the common restoration practice in warm regions such as Florida, Texas, and also in Indonesia, where we performed the experiment” Susan concludes. Read more here, and find the whole study here!