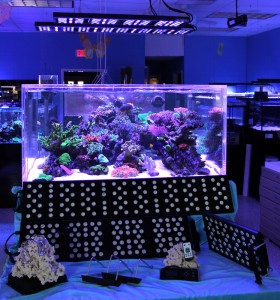 I remember the excitement about ten years ago when LEDs first came on the market for reef aquariums. The energy savings and heat reduction of an LED light were the biggest selling points, but the available spectrum array was small. Fast forward a decade, and we’re seeing more and more advances in the quality, construction, and color array of lights on the market. I have had a great amount of success growing and maintaining good coral color with LEDs, and I am always on the lookout for the next step in lighting technology.   I was curious about them, and when The Coral Reef’s owner Johnathan offered me the Reefcrest 26” to review, I happily obliged. The store’s display tank, which I had the chance to peruse while picking up the (light) has terrific color, and is full of thriving Acropora, Montipora, and a multitude of other SPS and LPS coral. The display has been running for 6 months with the new lighting, and the color on the coral was what I would normally expect from species grown under 12-14K metal halides; with full fluorescence, and without any bleaching, which can be a problem when transitioning from halide to LED. 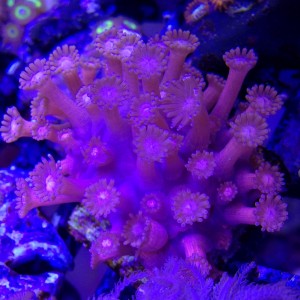 Armed with my latest toy, I returned to ReefGen headquarters and set up shop. I placed a large array of corals – Acropora, Montipora, Stylophora, and even Goniopora in a 36” by 24” trough, and positioned the light 12” from the top of the water.  Over the course of several weeks most of the coral exhibited the color I would expect at normal lighting levels with metal halide and T5 bulbs. Some of the Acropora on the top most rack, just 2 inches from the surface of the water did experience some initial bleaching, and when I tested the PAR with all the lights full blast the result was over 550. At the bottom of the tank, under 15”inches of water,  I had a reading in the mid 200’s, as strong as any halide.  After getting my high PAR reading I dialed back the intensity and the top most coral healed up quickly. 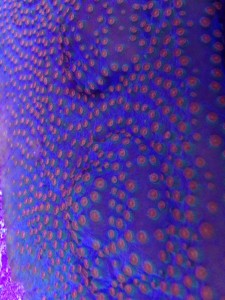 I did get growth comparable to my metal halides and T5s from my coral under the light, which I expected, as 1/3 of our current grow out is powered by LEDs. My complaint about most LEDs is the fact that they have such a narrow spectrum, and our difficult corals and SPS’s need more light in the red and near-UV range than what many brands currently provide.  Without enough red spectrum, many of these shallow water corals are unable to produce their full pigment potential. I’m pleased to report that the SeaLife LEDs include a wide range of colors in the blue, royal, red and UV ranges. The newest version they are producing now has double the UV bulbs as the first model. Care should be taken with red and UV lights because too much intensity of either spectrum has been linked to stress and bleaching. However without these spectrums the coral do not produce their full suite of fluorescent proteins.   Overall, I give the SeaLife LED a big thumbs up; it performed great at growing coral and getting the coral to keep its color.  This light and others like it on the market such as Acan Lighting’s Prism series, mimics natural sunlight more than many of the other narrow spectrum LEDs, and I would recommend it to growers and hobbyists alike.