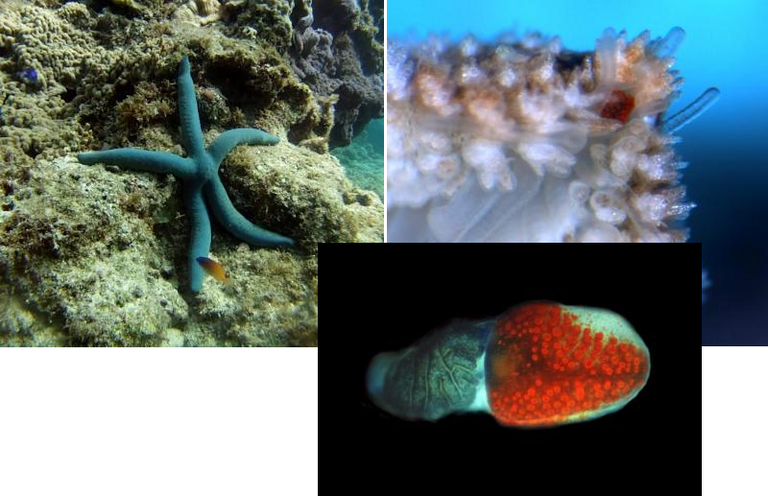 The starfish compound eye (red cups) is seen at the tip of the arm. Each red cup corresponds to a single optical unit, ommatidium, in an arthropod compound eye.


A study has shown for the first time that starfish use primitive eyes at the tip of their arms to visually navigate their environment. Research headed by Dr. Anders Garm at the Marine Biological Section of the University of Copenhagen in Denmark, showed that starfish eyes are image-forming and could be an essential stage in eye evolution.

The researchers removed starfish with and without eyes from their food rich habitat, the coral reef, and placed them on the sand bottom one metre away, where they would starve. They monitored the starfishes’ behaviour from the surface and found that while starfish with intact eyes head towards the direction of the reef, starfish without eyes walk randomly.

Dr Garm said: “The results show that the starfish nervous system must be able to process visual information, which points to a clear underestimation of the capacity found in the circular and somewhat dispersed central nervous system of echinoderms.”

Analysing the morphology of the photoreceptors in the starfish eyes the researchers further confirmed that they constitute an intermediate state between the two large known groups of rhabdomeric and ciliary photoreceptors, in that they have both microvilli and a modified cilium.

Dr Garm added: “From an evolutionary point of view it is interesting because the morphology of the starfish eyes along with their optical quality (quality of the image) is close to the theoretical eye early in eye evolution when image formation first appeared. In this way it can help clarify what the first visual tasks were that drove this important step in eye evolution, namely navigation towards the preferred habitat using large stationary objects (here the reef).”

Most known starfish species possess a compound eye at the tip of each arm, which, except for the lack of true optics, resembles arthropod compound eye. Despite being known for about two centuries, no visually guided behaviour has ever been documented before.