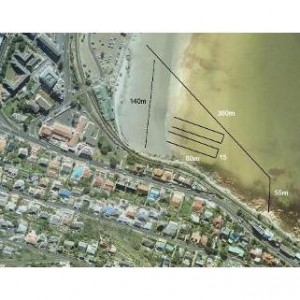 The City of Cape Town, South Africa, has been issued a permit, approved by the Agriculture, Forestry and Fisheries Department, to install nets at Fish Hoek beach for a trial period lasting until January 2014.   They will be deployed in the morning before sunrise and taken out of the sea at sunset.  It has been stated that these nets are physically quite different to the nets that have been used in KwaZulu-Natal, which were designed to trap and kill sharks.  They apparently have a far smaller mesh and are designed to be a barrier rather than to capture or entangle the animals.

In considering the use of the exclusion nets, the City needed to balance the impact on the local community:

The trial installation of an exclusion net within the confines of a research permit does not require public consultation, something that has ruffled a few feathers.  On completion of the trial though, long term implementation would require prior Environmental Authorization in terms of the National Environmental Management Act.