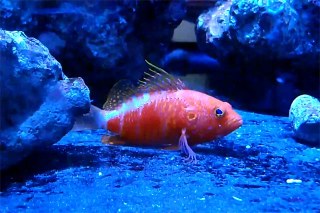 No surprise, but Blue Harbor (Japan) has new videos of these gems.  Plectranthias pelicieri is a deep water species whose natural range is yet undefined and is mainly known from the Mauritius in the Indian Ocean but has been reported as far north as southern Japan (unverified). Plectranthias sangamiensis is also a deep water species ranging from Southern Japan to Indonesia.  Both species are extremely rare in the aquarium trade and have exorbitant price tags to match (“If you have to ask …”).