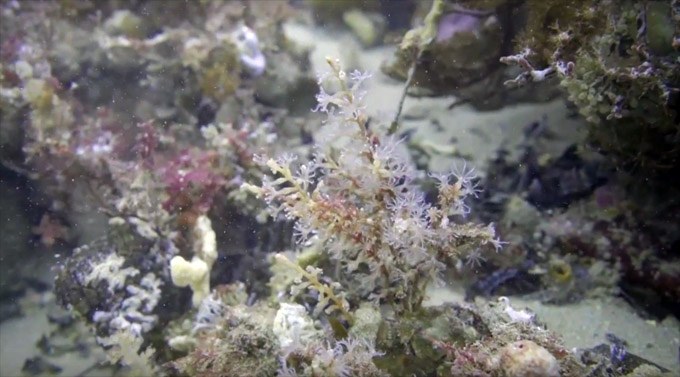 Tasmania’s Tamar River is a treasure trove of undiscovered species!


From the University of Tasmania Institute for Marine and Antarctic Studies:

Up to six new species of soft coral have been identified in the Tamar River estuary by Institute for Marine and Antarctic Studies (IMAS) Honours student Megan Dykman.

Highlighting both the conservation significance of the river and the quality of student research coming out of IMAS Launceston, the 22-year-old has completed a Bachelor of Applied Science (Marine Environment) and through her studies is privy to a magical world below the tidal waves that few get to see.

Yet to be formally named, the six previously unknown corals were discovered during sampling of 46 soft corals in a survey of rocky reef communities in the Tamar.

Taxonomy has formed the basis of Megan’s Honours thesis and the talented student, who received a Bruce Wall Honours Scholarship in Aquaculture, will graduate with First Class Honours later this month.

Megan has had to take advantage of a one-hour window of opportunity on any given day, as the tide is turning, to safely explore and collect samples from the waters in the lower estuary between Beauty Pt and Low Head.

“My original intention was simply to describe the animals and plants that live on the reefs in the Tamar with a focus on soft corals, but it looks like I have discovered four new species, and even more exciting, is that I have found two new genera of soft corals; that is to say two new groups of animal. The next step is to formally describe them,” Megan said.

IMAS Launceston senior lecturer Dr Jeffrey Wright said that it was inspirational to see Megan complete her degree in Launceston and then make such a big impact with her Honours project.

“She really has done some fantastic work on this project – combining challenging technical diving, electron microscopy and DNA sequence analysis. She did a great job,” he said.

“Soft corals are quite common in the Tamar River estuary and often photographed by divers. It is amazing that until now no-one has formally identified these species.

“To find several new species was surprising and it highlights how much there is to learn about the plants and animals in the estuaries and ocean around Tasmania.

“We know precious little about the ecology of soft corals in temperate regions such as Tasmania. Identifying the species is really just the start of understanding their role in these complex ecosystems.“

Megan’s research project was funded by the University of Tasmania, The Plomley Foundation and NRM North‘s Tamar Estuary and Esk Rivers Program and was undertaken with the generous assistance of octocoral taxonomist Dr Phil Alderslade.