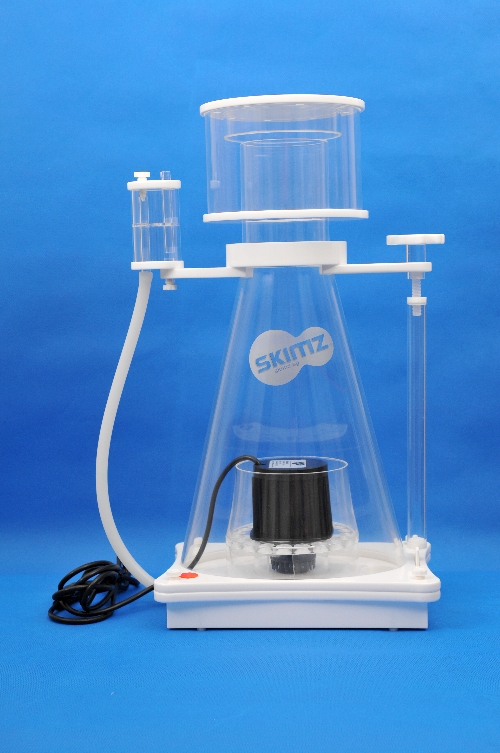 There might be a new fad up and coming in the protein skimmer world, and that’s the use of oval shaped bodies, as opposed to circular ones. Skimz, a popular skimmer maker out of Singapore, has just announced their new Oval Conical skimmer, which morphs the regularly circular shape into, well, an oval. While the design might appear to be a grab for something new and shiny with which to catch the attention of aquarium hobbyists, we actually love the design for many reasons. And the cherry on top of this new design is the very dependable open volute DC controllable pinwheel pump that can also be found on several other brands of skimmers. So what do we like about the oval shape? Look at it this way. If you take a 7″ diameter protein skimmer and squeeze two sides opposite each other a little more closely together, you still have roughly the same volume available, it’s just redistributed differently. So, you’re 7″ diameter body now maybe only takes up 6″ in one direction, but there will be some displacement and the skimmer will become a little wider the other direction. This is convenient for space saving considerations, and Skimz claims a 25% reduction in their skimmers’ overall footprints. The immediate benefit is that crowded sumps can have some relief, allowing for a little more wiggle room in those normally tight spaces. Adding to the allure of this oval skimmer is the use of the open volute concept, by which a pinwheel pump is placed inside the skimmer, facing downward. The skimmer’s base place serves as the pump’s volute, and the impeller is in plain sight underneath the bubble diffusing plate. This design has been gaining in popularity over the past several months, and by looking at videos posted on the Skimz YouTube channel, there’s little mystery why. These pump configurations work, and seem to work very MORE: Skimz Debuts New Oval Shaped Cone Skimmer with Open Volute Design