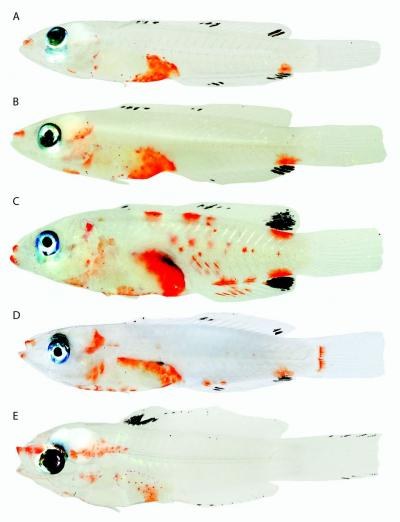 While the adult forms of these five labriformes species look different from one another as adults, here in their larval stage they are all very similar. A: Halichoeres bivittatus, B: Halichoeres garnoti, C: Halichoeres maculipinna, D: Halichoeres poeyi, E: Thalassoma bifasciatum. Credit: Photos A−C by Julie Mounts and David Smith; D, E by Lee Weigt and Carole Baldwin.

Many marine fish species spend their larval stage near the ocean’s surface―an environment completely different than the one they are in as adults. Two different environments often require two different body shapes and appearances, resulting in fish in their larval stage that bear little to no resemblance to their adult counterparts. Carole Baldwin, a zoologist at the Smithsonian’s National Museum of Natural History, examined more than 200 species of marine fishes in their larval stage, primarily from the western Caribbean. She found that in many cases larval color patterns of different species were very similar, contributing evidence to a phylogenic relationship.

Adult mullets, for instance, are very different in appearance than adult flying fish, yet when Baldwin examined these fishes in the larval stage she noticed that they share a unique transformation of color pattern that supports the idea that they could be closely related. Larvae of some species in the order Tetraodontiforme, like the pufferfish, and those in the order Lophiiforme, like the anglerfish, are strikingly similar in having the trunks of their bodies enclosed in an inflated yellow sac. Their appearance as adults, however, would not hint at a close relationship.

“More investigation of larval color patterns in marine fish is needed to fully assess their value in phylogenic reconstruction,” said Baldwin. “But the evidence I’ve found so far is promising that this will be an important taxonomic resource in the future.”

Color information on many more marine fish larvae is needed to fully use this new suite of evolutionary information, and Baldwin will encourage colleagues to obtain color photographs of larvae when possible. And studies on the formation of pigment, such as those conducted on the model freshwater zebrafish (Danio species), are needed.