Back in January, I shared with you all a post about Bartz Snow Sculptures. Soon after it was published, the Bartz brothers, Austin, Trevor, and Connor, revealed their sculpture for the 2018 season – 19-foot-tall Diggs the Lobster! The delightful sea/snow creature was visited by thousands of people before it finally collapsed on April 28, but before that that happened, he helped raise $16,191.00 for clean water all over the world. Admission to see Diggs was free, but donations were gladly accepted, and every penny collected was donated to One Day’s Wages. 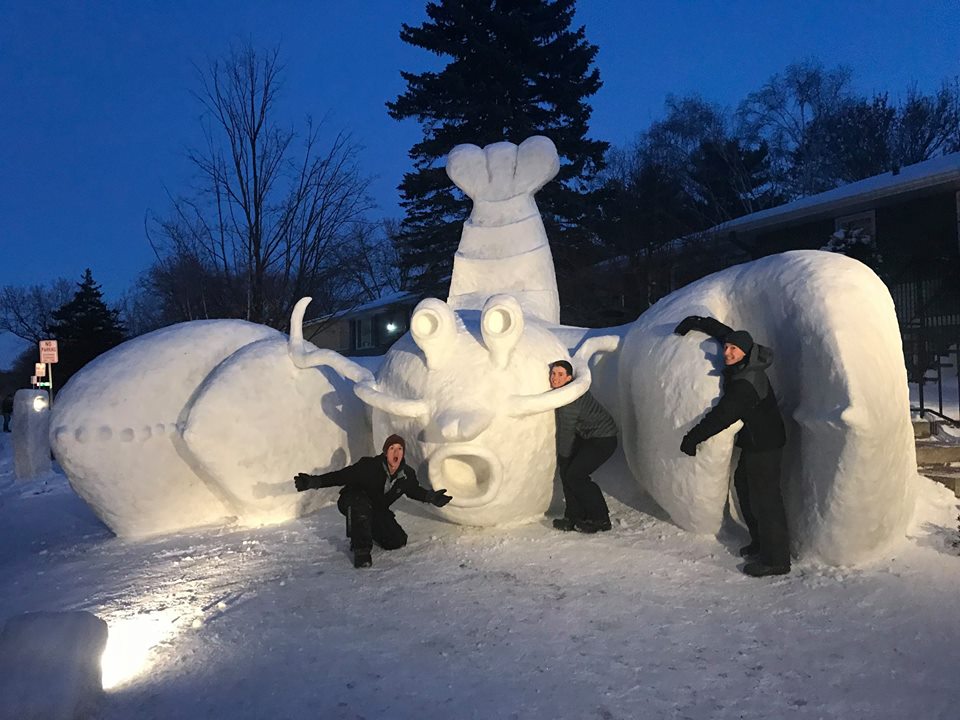 The solid sculpture took approximately 350 hours to build, and it sounds like it was quite a process – Matt Weinzetl of Aspen Outdoor Services and the City of New Brighton delivered multiple loads of snow, and the team also shoveled and hauled snow from nearby tennis courts. They then loaded the snow into their 90-degree garage, waited until it became packable, and hauled it back out for building. Diggs was named after the Viking’s Stefon Diggs, who made the winning catch in the NFL playoffs, and follows a long line of illustrious snow animals, including a puffer fish, walrus, shark, turtle, octopus, and fish.

The brothers report that the onslaught of foot traffic has completely destroyed their front yard, but they aren’t concerned; they raised an impressive amount of money for a very worthy cause, and they own a landscaping business, so they’ll be able to fix their property back up in no time!

Congratulations on your great success, Bartz brothers, and I’m excited to see what you come up with next year!

You can see lots of fun videos and photos of the process and finished product on their facebook page, HERE.

If you would still like to donate to One Day’s Wages, which provides clean drinking water to communities throughout the world, you can do so HERE.