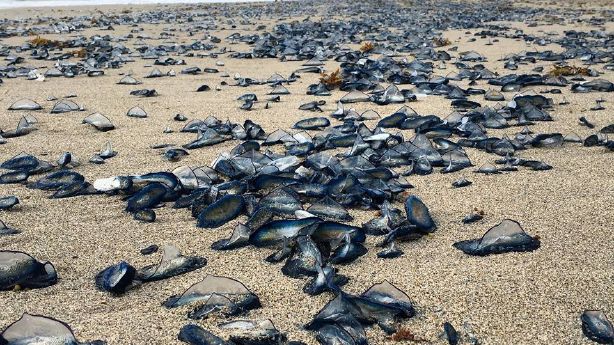 Thousands of jellyfish washed up on South Florida beaches last week. Hallandale Beach in North Miami, Florida was covered with bluish and purple jellyfish as far as the eye could see. These bluish and purple jellyfish are Velella Velella, also known as  ‘by the wind sailors’ or ‘blue-buttons’, and they typically live far off shore in open waters. They have a body with a stiff fin that catches the breeze like a ship would. However, they are often blown ashore by strong winds in massive numbers. The good news is these jellyfish are not harmful to humans. This should go without saying, but you should never touch any jellyfish washed ashore, especially in Florida. Especially since these Velella look similar enough to man-of-war, which are very venomous to humans, it is a good idea to leave all jellyfish alone and avoid the beaches where the jellyfish have watched ashore. “This happens about every three years. We are flying our Purple flag for dangerous marine life,” city officials said. “Public works beach tractor did rake up numerous, but they continue to wash up and cleanup will be a gradual process,” officials said. Not much fun for the many tourists and spring breakers ready to hit the popular South Florida beaches. MORE