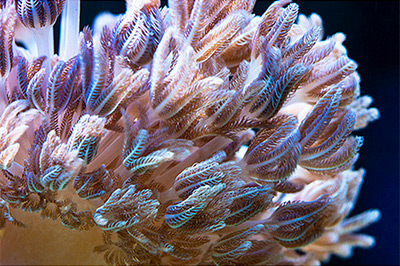 Pulsing Xenia, a wanderlust of a coral, requires some forethought on your part to keep the colony only where you want it in your aquarium.

In discussions of coral placement in reef aquaria, topics such as spacing between colonies, distance from the light source, level of water flow, sweeper tentacles, and coral chemical warfare (allelopathy) often predominate. But there are special considerations beyond these that one must take into account when determining the best placement for certain soft corals and polyps.

Here are just a few examples:

Major tissue expansion and contraction- With many of the SPS corals, the difference in the size of a colony between its expanded and contracted state tends to be fairly negligible. On the other hand, with certain soft corals, such as Sinularia, Lobophytum, and Sarcophyton leather corals, this difference can be quite dramatic, with colonies in their fully expanded state easily doubling or tripling their size when contracted. The degree of a colony’s expansion can vary not just based on daytime/nighttime, but also the system’s lighting, water flow, water quality, and other factors. If you don’t take this into consideration when placing a new colony in your system, a neighboring colony that has plenty of “elbow room” (corals have elbows, right?) today might be overshadowed tomorrow.

The cascade effect: Some soft corals have a nice compact tree-like growth habit when they’re relatively small, but as they grow, they tend to become more loose and top-heavy and then ultimately lie over, oftentimes cascading down the rockwork (depending on where they’re situated, of course). MORE