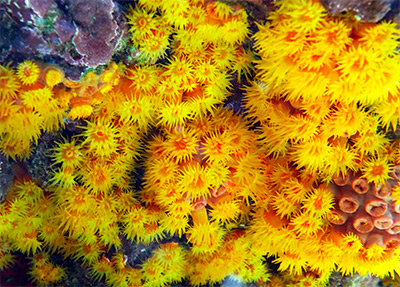 When ascribed to the various species of the genus Tubastraea, the common name “sun coral” is both fitting and ironic. It’s fitting when you consider that the spectacular polyps of many Tubastraea species can quite justifiably be described as sun-like in both color and shape. On the other hand, it’s ironic in that these species, unlike so many of the corals that grace our aquariums, lack symbiotic zooxanthellae and, therefore, don’t depend on sunlight—or intense reef-grade aquarium lighting—for their sustenance.

Having no special lighting needs might seem to suggest that these corals would be a good choice for the novice reefkeeper. However, just the opposite is actually true. Tubastraea are heavy feeders that require a high level of commitment and exceptional husbandry skills and are generally best left to more advanced hobbyists.

Physical traits: Tubastraea spp. are considered large-polyp stony (LPS) corals, with several species possessing striking yellow to orange polyps that emerge from tubular, and in some cases branching, corallites. There are also darker-polyped species that appear in the aquarium trade from time to time, such as T. MORE