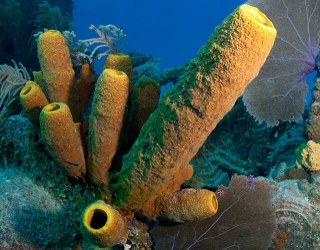 As reef enthusiasts may know, sponges are generally benign; The majority also do not compete for the same space as photosynthetic corals.  However, some species – known as excavating sponges – can erode aragonite matrices, causing actual damage to corals and the reef structure itself.

Manuel González-Rivero, Laith Yakob and Peter Mumby developed a mathematical model to describe the competition between corals, seaweed, and sponges.  The model takes into account rates of growth, coral erosion, grazing of sponges and seaweed by fish, nutrient levels, physical interaction of the three groups, and habitat disturbance.

What they discovered was that given certain conditions (e.g. high nutrients, low algae competition, low sponge grazing by fishes), sponges can indeed out-compete and overtake corals as the dominant life form.  Should sponges dominate corals at the ecosystem level, recovery is unlikely.

The equilibrium between corals and algae still play the dominant role, but this study hopes to show the importance of factoring sponges into ecological models for reef ecosystems.