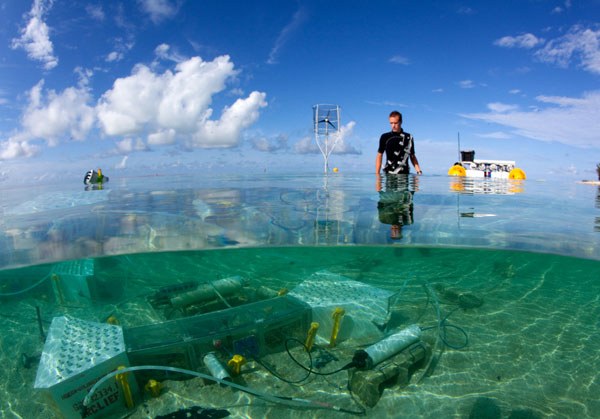 
Stanford researchers have helped open a new door of possibility in the high-stakes effort to save the world’s coral reefs.

Working with an international team, the scientists – including Stanford Woods Institute for the Environment senior fellows Jeff Koseff, Rob Dunbar and Steve Monismith – found a way to create future ocean conditions in a small lab-in-a-box in Australia’s Great Barrier Reef. The water inside the device can mimic the composition of the future ocean as climate change continues to alter Earth.

Inside the mini-lab, set in shallow water two to six feet deep, elevated levels of water acidity were created to test the reaction of a few local corals. (Other corals in the vicinity were not adversely affected.)

It was the first controlled ocean acidification experiment in shallow coastal waters. The scientists’ study, published in Scientific Reports, describes how they simulated predicted future ocean conditions off Heron Island in Australia’s Great Barrier Reef, representing a new paradigm for analyzing how reefs respond to ocean acidification. David Kline and Ove Hoegh-Guldberg at the University of Queensland led the project.

“Installing systems like this at reefs and other aquatic environments could be instrumental in helping us identify how ecosystems will change and which locations and ecosystem types are more likely to remain robust and resilient,” said Lida Teneva, a Stanford doctoral student studying with fellow team member Rob Dunbar, a senior fellow at the Stanford Woods Institute for the Environment.

“From this, we can determine which habitats to focus our conservation efforts on as strongholds for the future,” Teneva said.

Oceans absorb more than a quarter of all atmospheric carbon dioxide, concentrations of which are increasing at a rate twice as fast as at any time in the past 800,000 years or more. This leads to increasingly intense water acidification and widespread coral reef destruction. The potential loss is tremendous: reefs provide aquaculture, protein and storm protection for about 1 billion people worldwide.

Standard in situ studies of ocean acidification have multiple drawbacks, including a lack of control over treatment conditions and a tendency to expose organisms to more extreme and variable pH levels than those predicted in the next century. So, in 2007, the Monterey Bay Aquarium Research Institute developed a system that allows for highly controlled semi-enclosed experiments in the deep sea. For their recent study, Stanford researchers modified the system for use in coral reefs.

The complex device, the Coral Proto – Free Ocean Carbon Enrichment (CP-FOCE) system, uses a network of sensors to monitor water conditions and maintain experimental pH levels as offsets from environmental pH. It avoids many of the problems associated with standard in situ ocean acidification studies, and – unlike lab and aquarium experiments – makes it possible to study amid natural conditions such as seasonal environmental changes and ambient seawater chemistry.

The study was funded by the Australian Research Council, the Queensland Government, the National Science Foundation and the Pacific Blue Foundation.

This story is also available on Stanford’s news website.

Rob Jordan is the communications writer for the Stanford Woods Institute for the Environment.