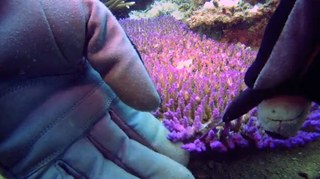 
Between April 26th and June 10th, scientists traveled to the Philippines for the largest expeditions in the history of the California Academy of Sciences. While there, they chanced upon a coral spawning event and recorded video of the event in addition to collecting many fine specimens including an ornate ghost pipefish which is now spawning in captivity.

In the below video, Steinhart biologists are shown collecting coral fragments for their collection. When colonies were found that were an interesting shape, color, or species, biologists either carefully clipped off small branches or found already broken-off fragments lying nearby.  All of the fragments were legally exported and then subsequently transported to their Golden Gate Park facility as part of their efforts at sustainable collection-building. The plans are to grow these small cuttings into larger colonies, which can then be fragmented to produce corals for display, in-house research projects and exchange with other zoos and aquaria.

Watch the video below to see them in action: