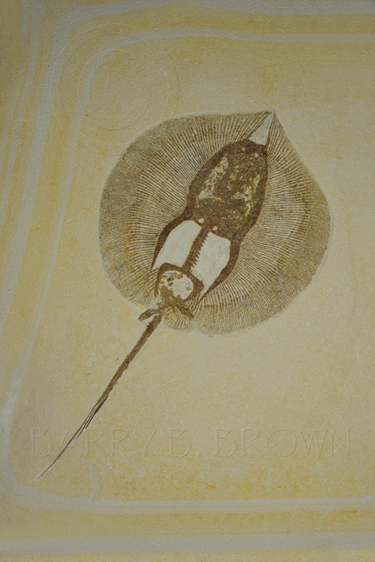 Good morning friends, Heliobatis is an extinct genus of ray in the Myliobatiformes family Dasyatidae. At present the genus contains the single species Heliobatis radians.

The genus is known primarily from the Early Eocene, Wasatchian stage, Fossil Lake deposits. Fossil Lake is part of the Green River Formation in southwest Wyoming. Heliobatis is one of only two known rays to have been found in the Green River formation; the other species, Asterotrygon maloneyi, was only recognized and described in 2004.

The genus was described from a single incomplete holotype specimen, number YPM 528, currently residing in the collections of the Peabody Museum of Natural History, New Haven, Connecticut, USA. The specimen was collected from an outcrop of Fossil Lake and presents a dorsal view of the fish. It was first studied by prolific American paleontologist Othniel Charles Marsh. He published his brief 1877 type description in the American Journal of Science. Two years later Edward Drinker Cope, rival to Marsh, published a description for a ray specimen giving it the name Xiphotrygon acutidens. though the description by Cope is more complete and includes an illustration of his type specimen, the old name Heliobatis has seniority.MORE