There has been some controversy of late regarding the negative effect that sunscreen may have on the health of phytoplankton and near shore coral reefs. Some studies suggest that some types of common sunscreen used by beach goers, swimmers and divers may be contributing to the declining health of reefs. The ingredients in sunscreen like zinc oxide and titanium dioxide, can react with the suns rays when they hit the water, creating hydrogen peroxide, the same ingredient found in bleach and kitchen cleaners. Hydrogen peroxide can damage some types of phytoplankton, the algae that inhabit coral reefs and provides vital nutrients for marine life. Some studies have shown that even very small amounts of this compound can have significant deleterious effects on phytoplankton. 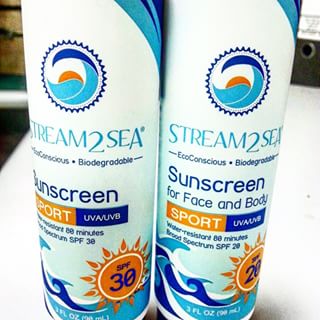 This was not news to the founder of Stream2Sea, Autumn Blum who said:  “The damage caused by benzophenone (also known as oxybenzone) had already been documented in previous reports,” she said. “The really big thing with this latest research was that such a tiny concentration could cause such extensive damage and the multiple ways it impacted coral reefs.” Stream2Sea has released two new Eco safe sunscreens that exceed the current ‘coral reef safe’ standards, a SPF 30 for the body and SPF 20 for the face and body. “Stream2Sea introduces new sunscreen products that are biodegradable, mineral-based, designed for high-performance and safe for oceans”. Both products are also biodegradable in salt and fresh water. They are available online and at certain retailers. MORE