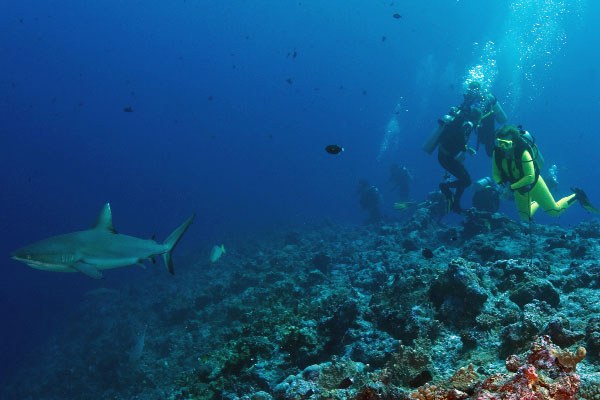 Photos by Peter Verhoog of the Dutch Shark Society


From the University of Toronto:

A team of scientists from Canada and Australia has discovered that a decline in shark populations is detrimental to coral reefs.

“Where shark numbers are reduced due to commercial fishing, there is also a decrease in the herbivorous fishes which play a key role in promoting reef health,” said Jonathan Ruppert, a recent University of Toronto PhD graduate. Ruppert was part of a team engaged in long-term monitoring of reefs off Australia’s northwest coast.

Team leader Mark Meekan, of the Australian Institute of Marine Science (AIMS), said that the results might, at first glance, seem strange.

“However our analysis suggests that where shark numbers are reduced, we see a fundamental change in the structure of food chains on reefs,” Meekan said.

“We saw increasing numbers of mid-level predators — such as snappers — and a reduction in the number of herbivores such as parrotfishes,” said Meekan. “The parrotfishes are very important to coral reef health because they eat the algae that would otherwise overwhelm young corals on reefs recovering from natural disturbances.”

According to Ruppert, the study comes at an opportune time — coral reefs are facing a number of pressures both from direct human activity, such as over-fishing, as well as from climate change.

The reefs studied are about 300 kilometres off the coast of northwest Australia where Indonesian fishers target sharks — a practice stretching back several centuries and which continues under an Australian-Indonesian memorandum of understanding.

“The reefs provided us with a unique opportunity to isolate the impact of over-fishing of sharks on reef resilience, and assess that impact in the broader context of climate change pressures threatening coral reefs,” said Ruppert. “Shark fishing appears to have quite dramatic effects on coral reef ecosystems.

“Given that sharks are in decline on reefs worldwide, largely due to the shark fin trade, this information may prove integral to restoration and conservation efforts.”

Tracking studies show that, in many cases, individual reef sharks are closely attached to certain coral reefs. This means that even relatively small marine-protected areas could be effective in protecting the top-level predators and allowing coral reefs to more fully recover from coral bleaching or large cyclones which are increasing in frequency due to the warming of the oceans as a result of climate change.

The study will appear in the September 28 issue of journal PLOS One.