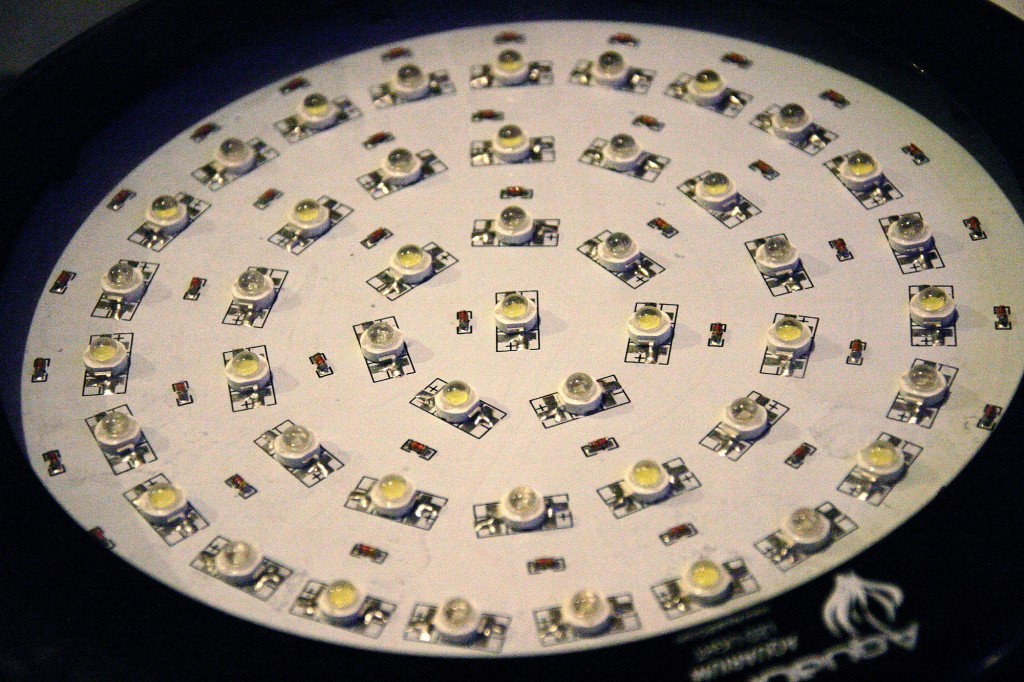 As promised in my article on Sunshine System’s new line, it’s time for some hands on testing with the AquaUFO. Before I get started, I must admit that these tests are not based on scientific readings, so please take them as purely comparative tests. I received my black linkable unit today, and was all too excited to get it out of the box and running. There’s still not much information on the web about these fixtures, so here’s the run down of what the box claims.

Sounds like a recipe for fun. The biggest thing that caught my eye was the spectrum of the diodes. To date I can’t recall seeing any LED units that were sporting 6500k daylights for the whites, and I’m expecting to see some major power output because of this. 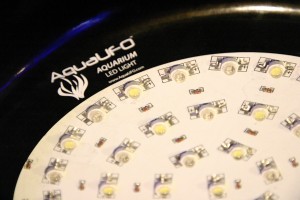 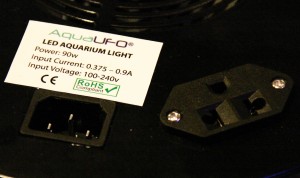 On to the fun part! The UFO comes neatly packed in custom fit Styrofoam, so shipping damage should be of no concern. It connects easily with included cord, but does not come with a built in switch, so an external timer will be needed. In my excitement I fired the unit up and began holding it over any body of water I could find. The first victim was a four foot by three foot coral flat. The optics seem to spread the light pretty far, so only about three feet between the water and light were needed to illuminate the entire flat. This flat normally operates on: 2-250w halides, 4-four foot actinic T5’s, and two four foot Reefbrites, and I have to admit the AquaUFO was comparable! Next I wanted to see some penetration, so I held the UFO up over a 90 gallon bowfront. This tank is just about as deep as the common hobbyist’s tank gets, and still it appears as bright at the bottom as at the top. This was enough fun to curb my enthusiasm for a little bit, so I headed off for a display to test it on. 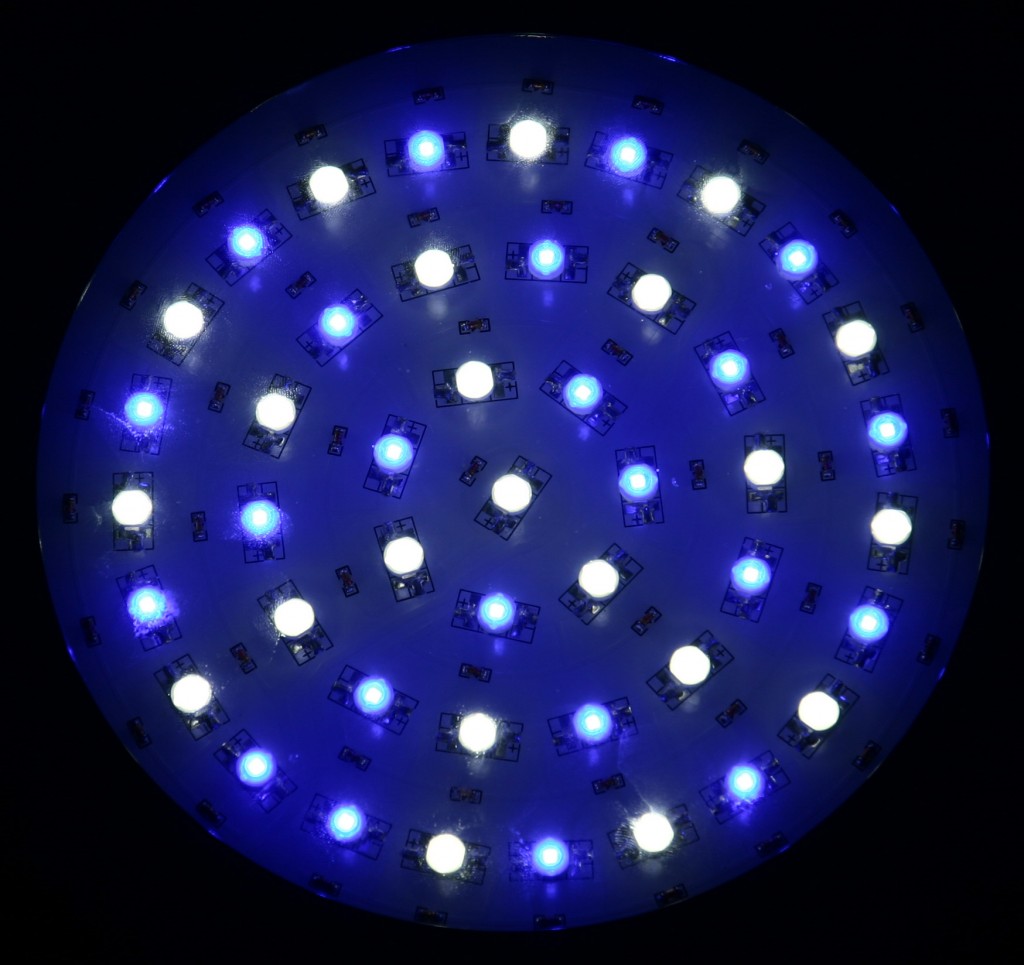 For my first test I naturally selected my home aquarium. At a mere 40 gallons, my tank is no match for this light, but it was too tempting not to try it. I first held the light up under my hood to get an idea of what I would be looking at, and was again shocked at the spread of the optics. On my 40 gallon breeder it spreads light to all four corners yet still doesn’t seem to lose much light over the edges. After struggling with the hanging wires for about half an hour (not my specialty,) I had it packed nicely into my hood and ready to go. I fired it back up and stepped back to admire the shimmer. Over the past year I’ve had the pleasure to run just about every type of lighting on this tank including a six bulb T5, eight bulb T5, metal halides and various LEDs. The AquaUFO ranks right up there with the best of them. Most the other LEDs I’ve run didn’t have as much power to get down to the bottom, so had some fall off. This one pounds the bottom as hard as it hits the upper rocks. It also drops light as evenly to all four corners as a T5 fixture, and has the shimmer of metal halide. This is one sweet light! 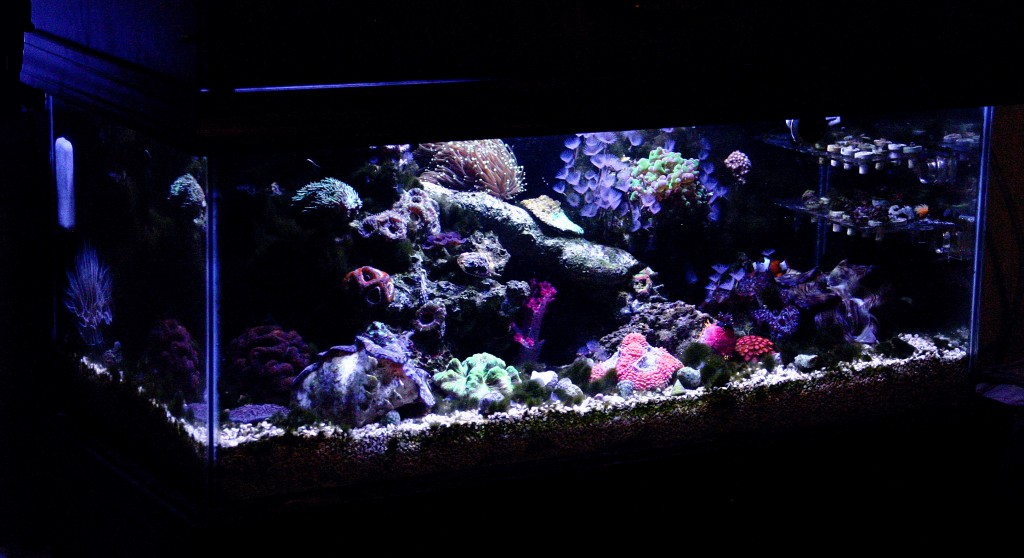 As I said before though, this is not the tank to test such power on, so it’s time to get this beast over a tank with some depth. With a four foot deep small footprint bowfront, Bill Richheimer’s SPS reef seemed like the perfect place to get this started. I’ve been assisting him in filling his tank with SPS for some time now, and know the lighting struggle it poses. Its four foot depth makes 400w halides necessary, but its small width makes fitting the reflectors in the hood impossible. The UFO is the perfect solution to this dilemma as it occupies very little space, but drops enough power to rival a 400w halide. The tank currently has two 250 watt metal halides, four 36″ T5s and three 4′ Reefbrites.

For my first test, I of course want to see how well the UFO lights the tank by itself, and to my surprise, it did a pretty good job. This tank is four foot wide by four foot tall, and the AquaUFO still managed to throw enough light through the eurobrace to nearly light all corners while still showing little to no light falloff at depth. I think if it were’nt for the brace on this tank, I would feel comfortable lighting it with one UFO and a couple of Reefbrite accents. 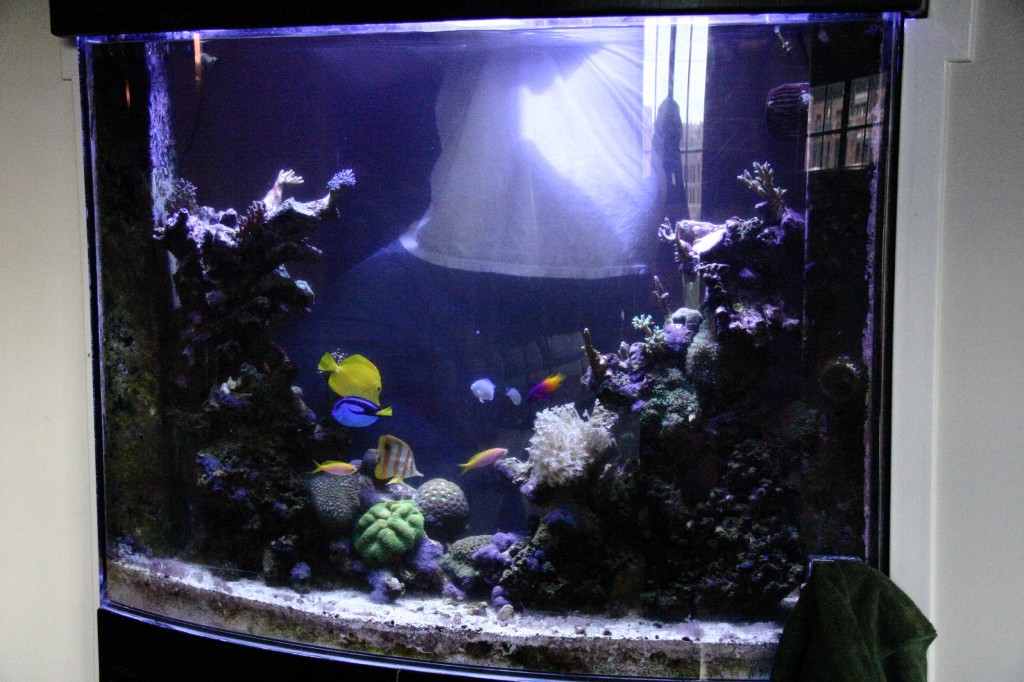 For my next test I wanted to get a direct comparison of the UFO against a 250 watt metal halide, so I shut off one side of the current fixture and put the UFO on the other side. This is where the AquaUFO really starts to shine through, literally! As you can see in the photo with the halide on left and UFO on right, They share similar brightness at the top, but about two-thirds down the halide starts to drop off while the UFO stays strong. If that’s not a testament to the penetrating power of LEDs, than I don’t know what is. 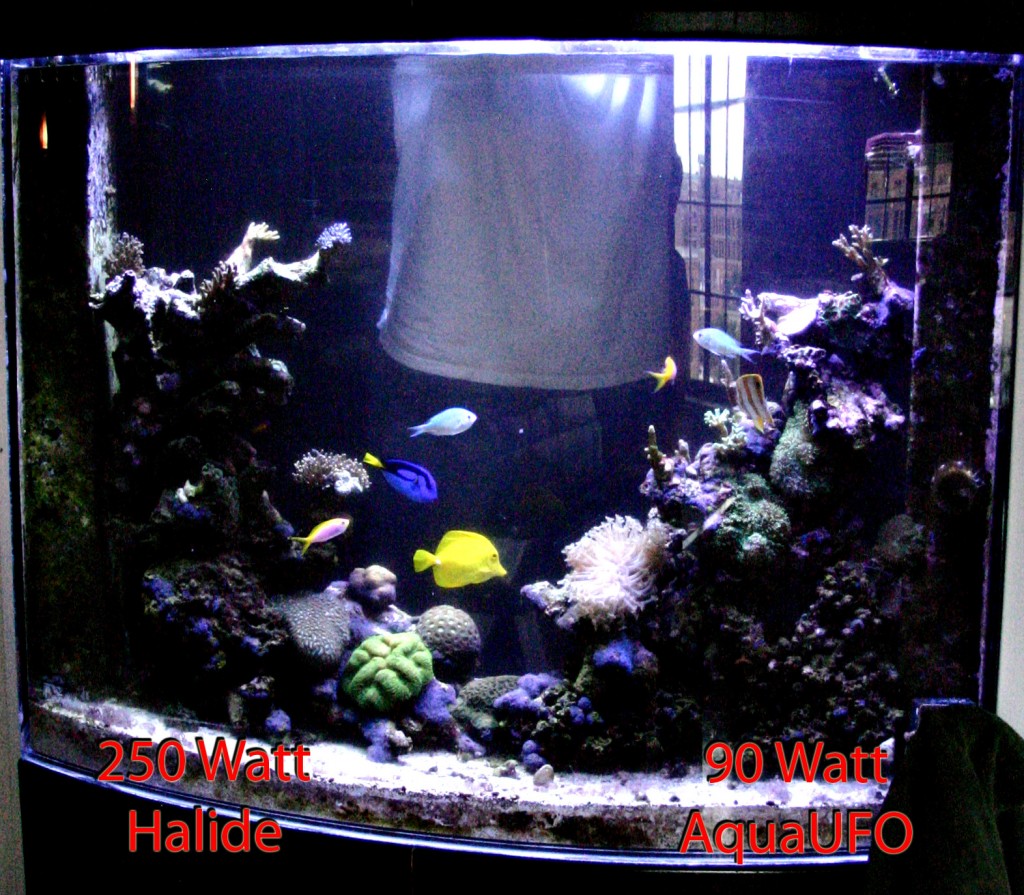 The Sunshine Systems AquaUFO is definitely a solid option for a tank such as this one. It’s compact size, low heat and extreme penetrating power make it the perfect thing to pack into the small hood over this deep tank.

I got the depth testing out of the way, so now it seems time to test out the spread, and what better way is there to do that than on a big footprint coral flat? For this test I picked out a three foot by four foot coral flat with various types of coral at fairly low depth. I didn’t expect much from this, because of the huge space to cover, but I was pleasantly surprised. The AquaUFO spreads out nice and evenly over nearly the entire flat! 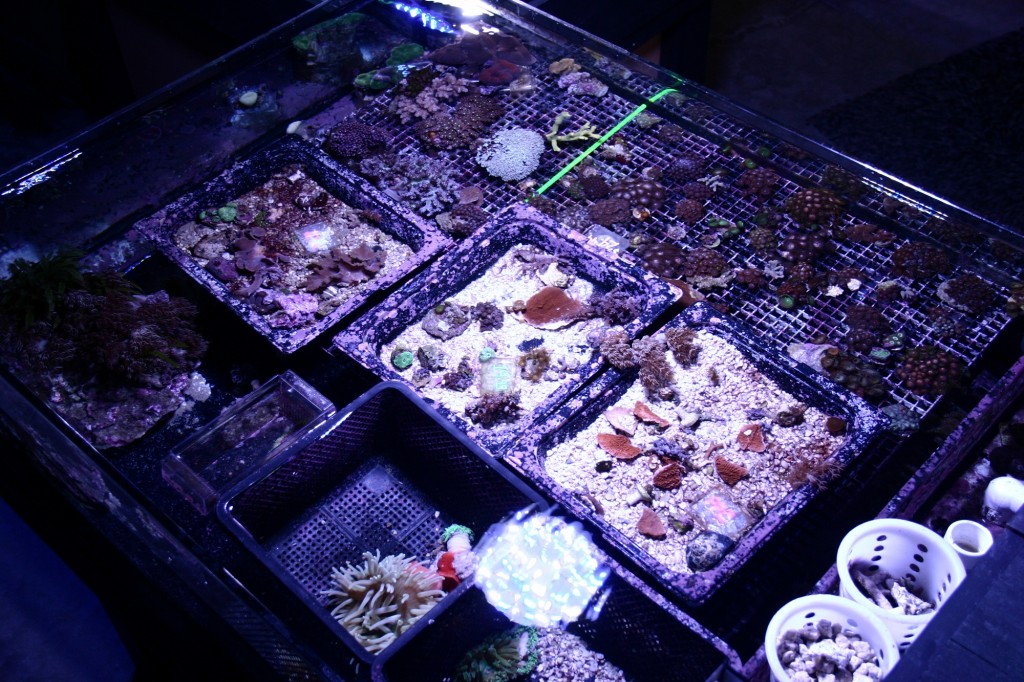 What a light this one turned out to be. With every new LED system I see, I become more and more confident in the diode revolution. The AquaUFO is definitely a step in the right direction, and with the new innovations set to come out in their next line of fixtures, things will only get better.

I think it should be said in this review that what Sunshine Systems is doing is amazing. Anytime another industry manufacturer leaps into the aquarium biz it’s something we should all be excited about. Other industries are far larger than the aquarium one, so it should be true that when a company crosses that line they have the background and capitol to do their research and do it well. This means better products for us from companies that don’t have to charge a premium to get them there. That’s what we need especially on the LED lighting front.

For more information about Sunshine Systems, visit them on the web at: http://www.sunshine-systems.com/