Supremely rare footage of oarfish swimming in the shallows 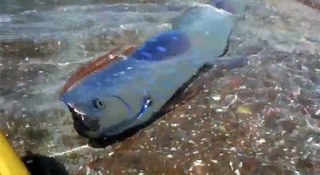 The oceans are full of wonder!

Human encounters with oarfish – even dead oarfish washed ashore – are very rare, so this footage of oarfish in the shallow tropical sea in the Sea of Cortés (Mexico) is truly something special.  The video was shot by a group affiliated with Chicago’s Shedd Aquarium.  The video begins with what appears to be a woman freeing a beached oarfish using boat paddles to send it out back to sea.

As previously mentioned, oarfish rarely wander into shallow waters.  It’s unknown why this happens.  Theories range from fish weakened by disease or injury to simply a specimen drifting inshore (oarfish are poor swimmers and are largely at the mercy of ocean currents).

Watching this video, “you can easily imagine where tales of sea serpents might have started,” as the Smithsonian article states.  We apologize for the small embed box, but you can maximize the video to full screen to really appreciate the scale of these amazing fish.  FYI: The footage records what is considered a small 15 foot long oarfish.  They can grow well over twice in length.