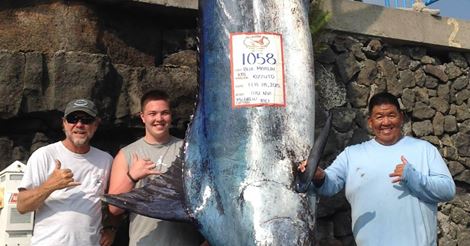 Kia Rizzuto, a 16 year old native of New York, reeled in a 1058 pound Blue Marlin off the Kona Coast of Hawaii. The fish was estimated an an impressive 14 feet long and was just 300 pounds short of breaking the International Game Fish Associations record for biggest Blue Marlin Caught, which was back in 1982. Kai and his family said that it took about 30 minutes to reel in the fish, and about needed the strength of four people to get the fish into the boat. Rizzuto is the probably the youngest angler to reel in an over 1000 pound catch. Since the fish was dead when he was brought in, the fish was shared with local people in the area.MORE