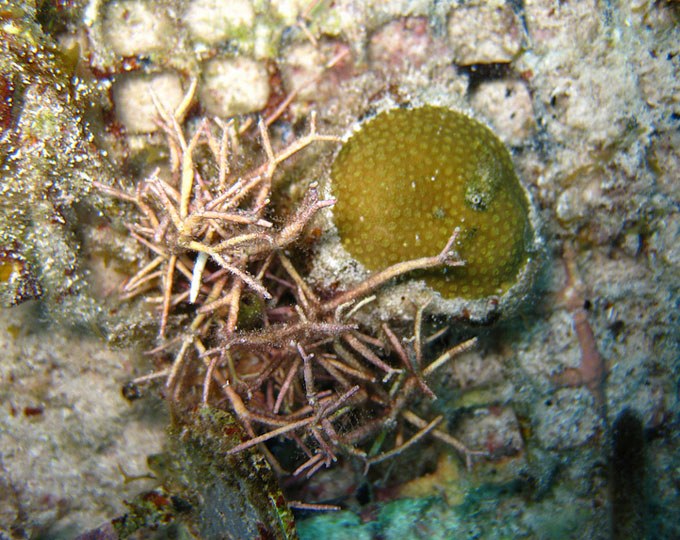 Researchers at Oregon State University for the first time have confirmed some of the mechanisms by which overfishing and nitrate pollution can help destroy coral reefs — it appears they allow an overgrowth of algae that can bring with it unwanted pathogens, choke off oxygen and disrupt helpful bacteria. These “macroalgae,” or large algal species, are big enough to essentially smother corals. They can get out of control when sewage increases nitrate levels, feeds the algae, and some of the large fish that are most effective at reducing the algal buildup are removed by fishing.

Scientists found that macroalgal competition decreased coral growth rates by about 37 percent and had other detrimental effects. Other research has documented some persistent states of hypoxia.

Researchers call this process “the slippery slope to slime.”

Findings on the research were just published in PLoS One, a professional journal.

“There is evidence that coral reefs around the world are becoming more and more dominated by algae,” said Rebecca Vega-Thurber, an OSU assistant professor of microbiology. “Some reefs are literally covered up in green slime, and we wanted to determine more precisely how this can affect coral health.”

The new study found that higher levels of algae cause both a decrease in coral growth rate and an altered bacterial community. The algae can introduce some detrimental pathogens to the coral and at the same time reduce levels of helpful bacteria. The useful bacteria are needed to feed the corals in a symbiotic relationship, and also produce antibiotics that can help protect the corals from other pathogens.

One algae in particular, Sargassum, was found to vector, or introduce a microbe to corals, a direct mechanism that might allow introduction of foreign pathogens.

There are thousands of species of algae, and coral reefs have evolved with them in a relationship that often benefits the entire tropical marine ecosystem. When in balance, some algae grow on the reefs, providing food to both small and large fish that nibble at the algal growth. But the algal growth is normally limited by the availability of certain nutrients, especially nitrogen and phosphorus, and some large fish such as parrot fish help eat substantial amounts of algae and keep it under control.

All of those processes can be disrupted when algal growth is significantly increased by the nutrients and pollution from coastal waste water, and overfishing reduces algae consumption at the same time.

“This shows that some human actions, such as terrestrial pollution or overfishing, can affect everything in marine ecosystems right down to the microbes found on corals,” Vega-Thurber said. “We’ve suspected before that increased algal growth can bring new diseases to corals, and now for the first time have demonstrated in experiments these shifts in microbial communities.”

Some mitigation of the problem is already being done on high-value coral reefs by mechanically removing algae, Vega-Thurber said, but the best long-term solution is to reduce pollution and overfishing so that a natural balance can restore itself.

Corals are one of Earth’s oldest animal life forms, evolving around 500 million years ago. They host thousands of species of fish and other animals, are a major component of marine biodiversity in the tropics, and are now in decline around the world. Reefs in the Caribbean Sea have declined more than 80 percent in recent decades.