The most popular coral species in our hobby usually have an outstanding diversity of color patterns.  Zoanthids seem to have a limitless number of “morphs” and color variations that hobbyists enjoy collecting and trading.  Acanthastrea also appear to have an almost endless variety of colors.

“Open brain” corals of the genus Trachyphyllia (Trachyphyllia geoffroyi and Wellsophyllia radiata) also have a huge variety of color variation.  The most common colors are red and green.  Color patterns are widely dependent on collection depth and area.  Most specimens are collected in Indonesia, and smaller numbers from Australia. 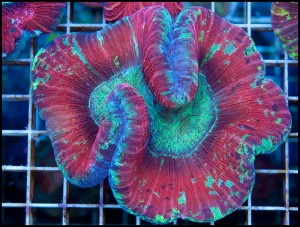 To achieve top color and health in Trachyphyllia, I recommend the following care: 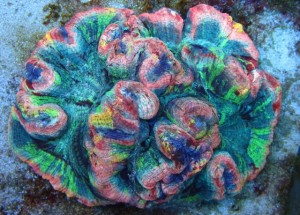 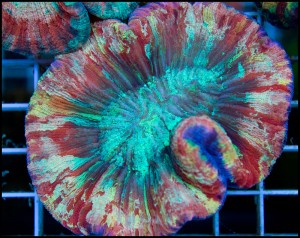 I’ve also noticed blue lighting (from actinic/blue fluorescent lighting or LED) in combination with low flow and indirect light has the biggest effect on an ordinary specimen turning into a real eye catcher.

Australian specimens coming into the hobby are quite different from the Indonesian specimens.  They are typically smaller and do not inflate their tissues as much as Indo brains.  Colors are typically very bright green/yellow and a more muted array of green, yellow, and brown. 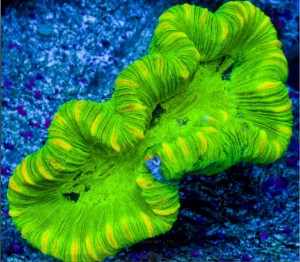