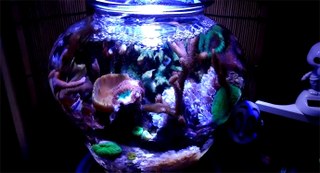 
Brandon Mason inspired many nano/pico aquarists to attempt low-tech vase aquariums with his one-gallon Reef Bowl, which he started in 2006 and, as we reported, was still going strong as of 2013.  Obviously aquariums with volume this small are finicky and require diligence to upkeep, but many aquarists are lured by the challenge, novelty, and aesthetics of itty-bitty reefs growing within unconventional vessels.  Mary Arroyo’s Maritza is perhaps the finest example of a successful pico reef vase we have seen.

Maritza’s equipment and maintenance rundown is as simple as they come:

This is the spectacular result: