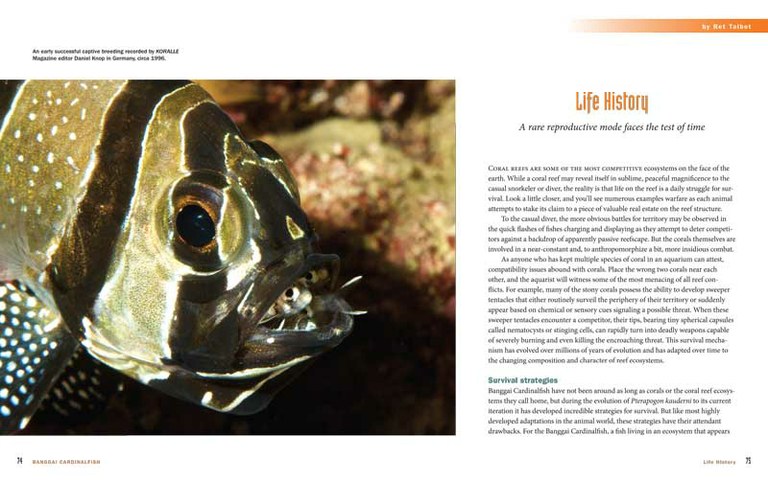 
Entitled Banggai Cardinalfish: A Guide to Captive Care, Breeding & Natural History, the book is authored by a who’s who in the marine aquarium world: Ret Talbot, Matt Pedersen, Matthew L. Wittenrich, Ph.D., Martin A. Moe, Jr. and aquatic veterianarians Roy Yanong, V.M.D. and Thomas Waltzek, D.V.M., Ph.D. The foreword is written by Dr. Gerald Allen, who rediscovered the species and presented it to the aquarium world in 1994. James Lawrence, editor of CORAL Magazine and more than 30 Microcosm marine aquarium titles, wrote the introduction and edited the volume. Julian Sprung, through his Two Little Fishies Inc., is the exclusive distributor of the book.

“Our goals in launching the Banggai Rescues Project and producing this book were threefold,” says Lawrence:

Inside the Banggai Triangle

Starting with Allen’s recounting of his discovery of Pterapogon kauderni in a remote archipelago in Sulawesi, Indonesia, the book follows a 2012 expedition to the so-called Banggai Triangle. Embedded photojournalist Ret Talbot provides a firsthand view of the species in its native waters and as studied by a team of American and Indonesia marine scientists.

What they found were areas that once supported massive swarms of Banggai Cardinalfish are now fished out or showing obvious signs of over-collection.

Says Lawrence: “Some in the aquarium trade and media have suggested that we were crying wolf in even suggesting that this species is in trouble from overcollection. It was not our role to go to Indonesia and do population studies, but rather to join forces with LINI and the scientists there who are on the ground and in the waters of the Banggai Islands. They have been counting fish, monitoring exports, and tracking the decline of this fish in its endemic range, and, as Ret Talbot reports the news is not good.”

“This initiative [to protect the species] is becoming increasingly urgent as the wild populations of Banggai Cardinalfish are being depleted day by day,” states Gayatri Gayatri Reksodihardjo-Lilley, head of the Indonesia Nature Federation, which is working with local fishermen to make marine livestock collection more sustainable. The problem, she says, “is mainly due to over-collection to supply the marine ornamental trade.

“The recent inclusion of the Banggai Cardinalfish on the IUCN List of endangered species has had no positive effect on levels of exploitation. Besides over-collection, there are many other factors affecting the area, which can only be addressed by implementing a management plan for the archipelago.”

Lawrence says that the Banggai Rescue team hopes that the book will make more people in the marine aquarium world aware of the real situation and foster more cooperation between the livestock trade and those working to reform collection and handling in the source country. The deadly Banggai Cardinalfish Iridovirus, he says, remains a mystery and is something worthy of further research in the years ahead.

What Hobbyists Can Do

The book also devotes a considerable portion of its 304 pages to hands-on husbandry and breeding advice for marine aquarists wanting to keep Banggai Cardinalfish and perhaps produce them to supply local demands for captive-bred fish.

Matt Pedersen, who established a Banggai breeding section in his Minnesota basement fishroom, dispels the claim that breeding Pterapogon kauderni is akin to raising Guppies.

Pedersen writes: “In 2009, Daniel Knop put forth a perplexing assertion: This species is the easiest to breed. Tank-bred Pterapogon kauderni ought to be veritably pouring from private hands into the trade. But, as colleagues in the retail aquariumhobby have recently confirmed, P. kauderni are not widely available as tank-breds.” Knop is the founding editor of KORALLE, the German parent magazine of CORAL, and an experienced keeper and home breeder of the Banggai Cardinalfish.

Pedersen continues, “Knop was suggesting that the paucity of captive-bred Banggais was the result of our failure to meet a need and that a major change in the mindset of the marine aquarium hobby could change the tide for the captive propagation of Banggais, making them flood the market as Knop felt they should.

“When we look at the realities of breeding Banggais, it becomes clear that opinions like Knops assertion, ‘This species is the easiest to breed’, are what throw us collectively off- track and inadvertently point us in the wrong direction.” Using the hard-learned lessons of many breeders and a profusion of Banggai breeding images, Pedersen proceeds to lay a path to success with pragmatic information, basic to advanced, on broodstock acquisition, pairing, conditioning, spawning, and rearing.

The book will be on sale at MACNA at the Two Little Fishies booth, number 407, near the entrance to the raffle area. The softcover edition will be available for $34.95; hardcovers are $44.95.

Information on ordering single copies can be found at the Reef to Rainforest online store; copies will start shipping September 3rd. See www.TwoLittleFishies.com or www.Banggai-Rescue.com for more purchasing / ordering information.