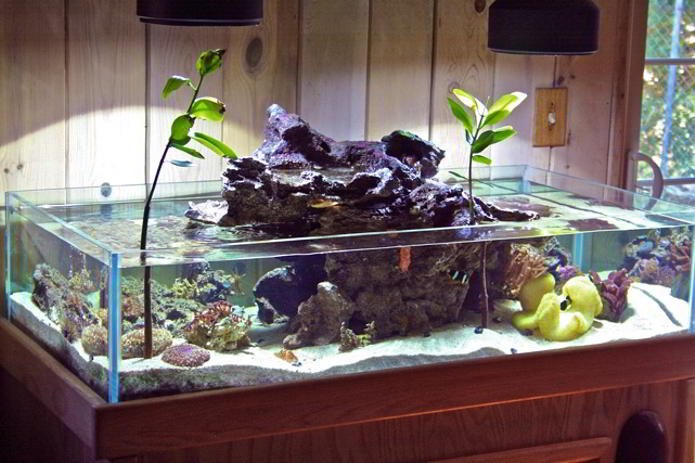 
The following 75 gallon aquarium is the creation of Kyle Verry and is the next iteration of his Volcano Tank that he tore down in late 2010 to create this new tank design.  The tank is rimless, measures 48″ x 24″ x 12″, and the main feature of the tank is a central raised “basin” of rock that appears to be fed water from a submerged aquarium pump.

The basin itself is 3″-4″ deep and houses a number of button polyps, a couple of mushroom corals, and maybe a hermit crab or two.

Assuming the remainder of the equipment setup is similar (or identical) to the Volcano Tank, the sump is 25 gallons and houses an ASM G3 skimmer, Poseidon PS3 & PS4 pumps, a JBJ Artica 1/3 hp Chiller, and is lit by two 150 watt HQI 12.5K Pendants.

It’s really a unique design and we look forward to watching this tank mature.

We are always on the lookout for new tanks to feature here.  If you have a reef tank that you’d like to see featured on Advanced Aquarist, please let us know about it by leaving a comment after the video.