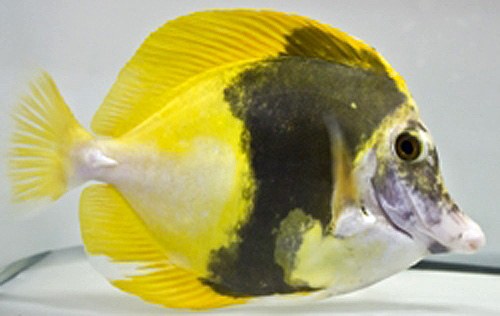 An aberrant scopas or yellow tang, or possibly a hybrid?

Atlanta, GA, July 30, 2013 –(PR.com)– The marine fish is believed to be an aberrant Scopas Tang (Zebrasoma scopas) that was recently collected in Andaman Sea, located in the Indian Ocean. The fish was collected using a hand-net method and was found approximately 6 miles off-shore at a depth between 60-85 feet, surrounded in an area frequenting Scopas Tangs.

The rare fish was transported by ferry from Sabang to Banda Aceh, quarantined before traveling to Bali and was air freighted to Atlanta’s Hartsfield-Jackson International Airport where it was picked up by Sun Pet’s staff.

Standard Scopas Tangs typically have a whitish-brown face that fades into a black-brown coloration midway through the body towards the tail. This abnormal Scopas Tang looks very similar to the Yellow Tang (Zebrasoma flavescens), in that it has a predominantly bright yellow body but this fish, has an olive green-brown splotchy coloration from the back of the gills to midway through the body. The face is predominantly white with some yellow and the same olive green-brown splotches apparent.

Barry Wisebram, General Manager of Sun Pet, explains that “aberrant fish are a particular category of fish that serious exotic fish collector’s with the right setup and resources are quick to jump on when the opportunity presents itself.” Mr. Wisebram further indicated that details will be requested for the purchaser of this fish to ensure its requirements for thriving are met.

Sun Pet Ltd. is a live fish and animal wholesaler and is offering this fish wholesale to tropical fish retailers, public aquariums and educational institutions. Wholesale Only.