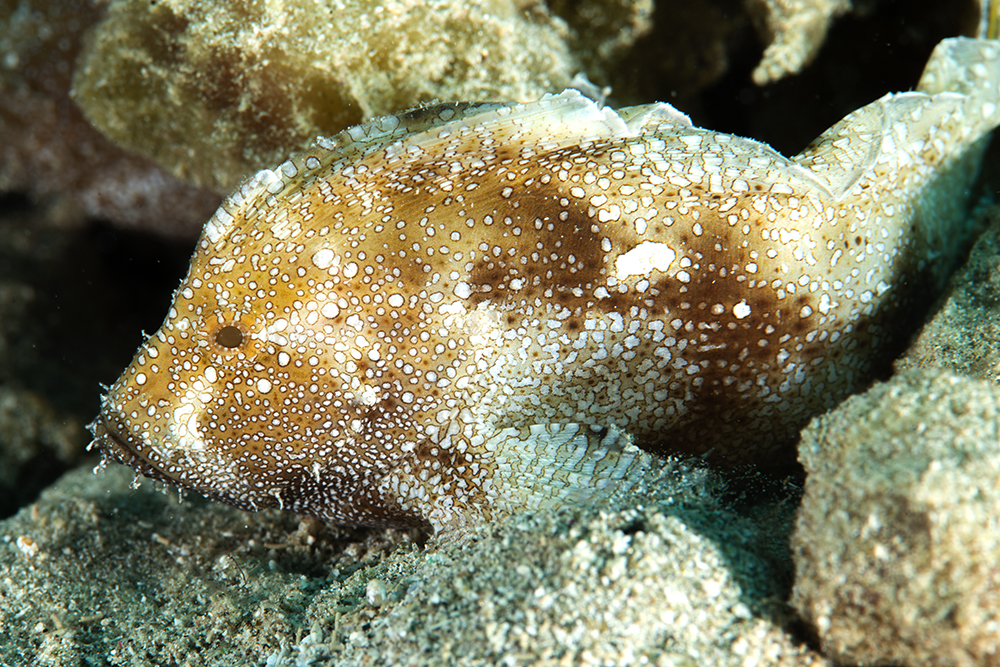 There are several fish in my Red Sea guidebook that I’ve long suspected may be part of some conspiracy against me, and that in reality don’t exist… I realize that’s obviously nonsense, but after many dives failing to find a fish it’s easy to just assume they’re never going to turn up and I’ll never shoot one.  This is exactly the case with Ptarmus gallus.  I’d written them off and wasn’t going to devote one more dive to another fruitless search.

I’ve been on several dives when the guides have said we might see this species, only for us to be unsuccessful.  Finally, on a shore dive in a shallow, sheltered bay, I was lucky enough to get my shot and a fish that had only ever been a picture in a book appeared in front of me, after, I have to admit, a great deal of the guide pointing at what I thought was just another piece of algae-covered rock.  What a very well camouflaged fish this is.

P. gallus is a Red Sea endemic and one of around forty species of velvet fish.  Interestingly Wikipedia says: “…since they are rarely seen, it is likely that there are many more remaining to be discovered.”  Yep, that seems to agree with my experiences!

Happily, like its relative the stonefish, the velvetfish is so sure of its camouflage it stays very still and was one of the best subjects I could have hoped for, though it didn’t want to erect its dorsal fin for me. But that’s okay, I finally got my fish!