Closely related are the seven “sand darts” species of the genus Kraemeria, which differ most notably in the elongated lower jaw adapted for burrowing and the smaller pectoral fins. [While it isn’t mentioned in the description of the genus, it is presumed that Parkraemeria is derived from Para- (Gr. “near”) and Kraemeria, alluding to the close relationship of these two.]The sand darts live in similar habitats as the ginpohaze, though with a more widespread tropical distribution. Rather than residing in vertical burrows, Kraemeria shallowly buries itself up to its eyes with sand in the same manner as Trichonotus,lunging out to grab passing zooplankton. The general similarities between these two unrelated groups are a striking case of convergent evolution, where similar ecological and behavioral traits have independently brought about similar morphological adaptations in unrelated lineages.

Gobitrichonotus is the final related genus to discuss. The two poorly-known species, G. radiocularis and G. arnouldi (nomennudum?), are similar in morphology to Krameria but have fused pelvic fins and fully-separated dorsal fins. Together with the sand darts and the ginpohaze, these three genera have traditionally been treated as the Kraemeriidae, a family related to, but distinct from the Gobiidae. Previous to this family-level recognition, the kraemeriids were allied to the superficially similar sanddivers (Trichontidae) and even the distantly-related blennies (Blenniidae).

Recent molecular studies have shown strong support for a new placement for these fish, nestling them deep within the phylogeny of the true gobies of the family Gobiidae. The family, as defined by Thacker, can be divided into two main groups. One is composed of the “kraemeriids”, as well as several genera of familiar aquarium gobies that similarly inhabit silty/sandy tropical waters. The other clade is composed of the remainder of the true gobiids, including such common aquarium genera as Gobiosoma, Valenciennea, Eviota, Amblyeleotris and Pterelotris. It also bears mention that the ginpohaze has never been studied molecularly, and there are some notable differences in morphology and behavior relative to the other “kraemeriids”, so its precise relationship within Gobiidaeis supported rather tenuously. 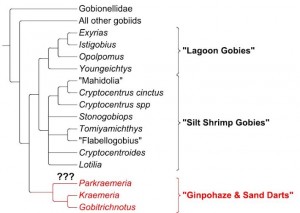 As best I can tell, ginpohaze have never been exported in the aquarium industry, which, given their geographic distribution, is unsurprising. The species likely has a wide tolerance for temperature (from subtropical Sydney, Australia to 86F waters off the Yaeyama Islands) and an equally wide range for salinity, with several reports indicating a preference for brackish waters. The only special consideration would be the need for a deep enough sand bed for the fish to construct its burrow. Males would potentially be territorial towards themselves and would potentially harass females as well, thus necessitating a large aquarium footprint to house multiple specimens. The diet, as in most gobies, should be easy to provide with standard aquarium foods.

The ginpohaze surely has the potential to be a spectacular aquarium inhabitant… if only someone would collect it.