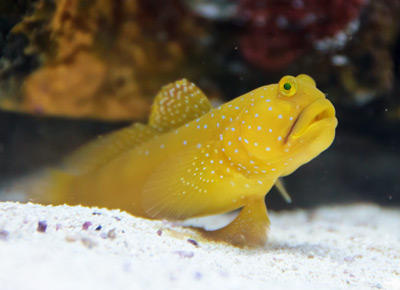 Marine aquarium hobbyists who maintain a nano tank can find it challenging to acquire fish that are well-suited to their diminutive systems. But with the yellow watchman goby (Cryptocentrus cinctus), they can get all the attributes they seek—small mature size, attractive coloration, hardiness, and interesting behavior—in a single package. While the yellow watchman goby, aka the yellow shrimp goby or yellow prawn goby, can be housed by itself with no problems, in my opinion, it’s much more interesting and rewarding to keep it as it commonly occurs in nature—with an Alpheus spp. pistol shrimp (e.g. Alpheus bellulus, the tiger pistol shrimp) sharing its burrow. In this mutualistic, symbiotic relationship, the shrimp, which has very poor eyesight, continuously excavates the burrow while the goby stands sentinel against predators. At almost all times, the shrimp keeps at least one of its antennae in contact with the goby so it can immediately sense when danger is near via the goby’s body language.