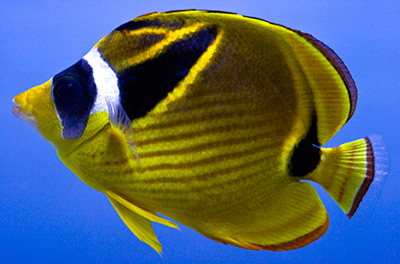 Some of the marine fish we like to keep are surprisingly recognizable to both hobbyists and non-hobbyists alike—probably because they’re frequently depicted in photographs and artwork. Among these iconic fishes is the raccoon butterflyfish (Chaetodon lunula) of the Indo-Pacific and southeast Atlantic, a very hardy species that’s better than your average butterfly in terms of aquarium suitability and even beginner-friendliness.

C. lunula would also be a great choice for natural pest-anemone control in reef tanks if it could be kept in such a system safely (but, alas, it cannot—more on this later).

Physical traits: C. lunula has “typical” butterflyfish morphology, with a highly laterally compressed body and a pointed snout. Its color is orangish-yellow overall with a dusky hue on the dorsal half of the body and faint diagonal stripes on the ventral half.

Like its terrestrial namesake, its eyes are obscured by a black “mask.” Behind the mask is a white bar, and two dark bands edged in yellow extend upward from the white bar. MORE