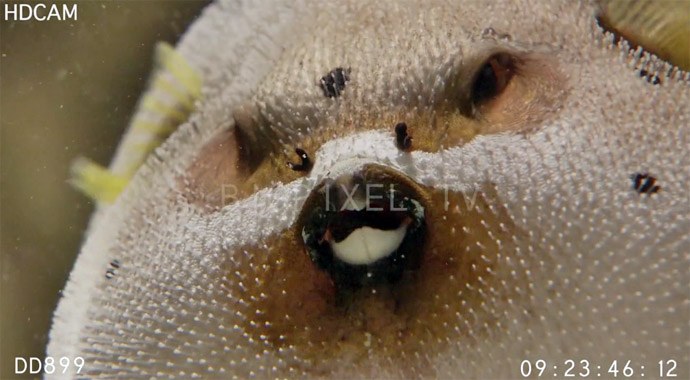 
Just look at this face.  It may look comical and adorable, but remember that this is the stress response of dogface pufferfish, Arothron nigropunctatus.  In other words, it’s not a happy camper right now.  But contrary to popular myth, puffing is not physically dangerous nor a death sentence for these fish.  It’s a natural defensive response which they will recover from once the perceived threat is gone.  After all, what kind of defensive mechanism would it be if you die after using it?  But please don’t make your pufferfish puff for no good reason.  You are literally just stressing it out for your amusement.

Dogface puffers are among the most personable fish in the sea.  They not only have the face of dogs, but many will say they also have personalities similar to dogs: playful and attention-seeking of their owners … as true a “pet” as any reef fish.

Pufferfish are hardy but have some special care considerations; for example, their beaks are constantly growing so owners must supply their puffers with shell-based diets to help them naturally grind down their beaks.  Most species also require large aquariums, and owners must safeguard their decorations and equipment against their puffers’ inquisitive, playful, but often destructive natural tendencies.  They’re also notorious fin-nippers, so select appropriate tankmates.  Provided you can accommodate their needs, puffers do make wonderful pets.