The resilience of coral reefs 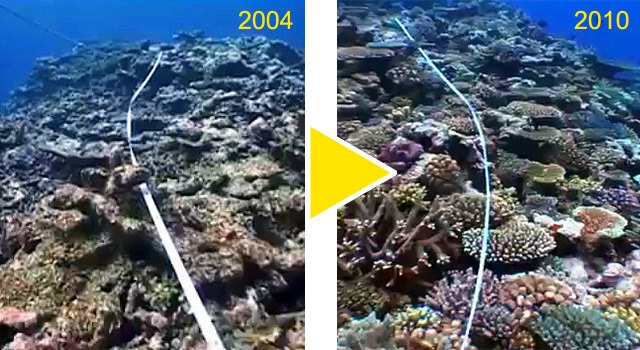 Amazing rebirth of a reef wiped out by a bleaching event.


Dr. Carlson’s video tells the story of two reef sites with drastically different histories and present-day conditions.  At a once vibrant shallow coral reef site close to Fiji’s capital city, local fisherman increasingly harvested herbivores over three decades hypothetically to a tipping point.  Algae has overgrown and killed all the stony corals, and all that remains there is a Sargassum algae reef.

However, at another relatively protected/secluded Fijian reef, corals showed remarkable resiliency.  Less than a decade after a catastrophic bleaching event completely wiped out stony corals, this reef site has nearly rebounded back to its former glory.

As a sidebar, Dr. Carlson also noted how quiet unhealthy reefs are and postulated if sound recordings via hydrophones may serve as an effective additional metric to monitor reef health after a bleaching event.