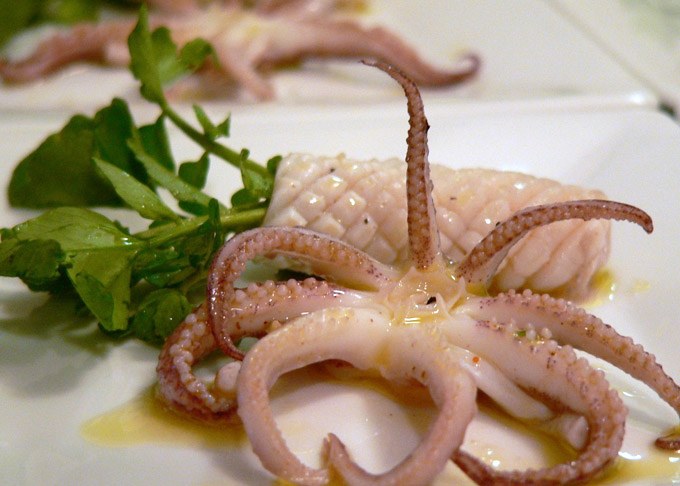 An undercooked squid dish may try to impregenate you! Photo by “HarlanH”


In February, the Journal of Parasitology reported on an interesting case of a Korean woman and her squidy meal: “Penetration of the oral mucosa by parasite-like sperm bags of squid: a case report in a Korean woman.”

Here’s the situation: the unidentified Korean woman, age 63, parboiled (partially boiled) a Japanese flying squid, Todarodes pacificus, for her meal.  She then proceeded to eat the squid along with its internal organs.  At some point during her meal, she took bite and spit it out after experiencing severe pain in her mouth.  She then experienced “a pricking and foreign-body sensation” in her mouth and was taken to a hospital for examination.

Doctors at the hospital found “twelve small, white spindle-shaped, bug-like organisms stuck in the mucous membrane of the tongue, cheek, and gingiva” of her mouth, which were subsequently removed and identified.  As it turned out, all twelve of the white spindle-shaped things were positively identified as squid spermatophores.

Danna Staaf over at the Squid a Day blog describes spermatophores as having “an ejaculatory apparatus, which can expel the sperm mass quite forcefully, and a cement body for attachment.”  Each of the spermatophores were doing exactly what they were designed to do: attach to a membrane and eventually release their payload.  Danna also mentions there is another report of this happening back in December 2011. However this was with an uncooked squid.

Lesson for the day: completely cook your squid and do not eat the internal organs!