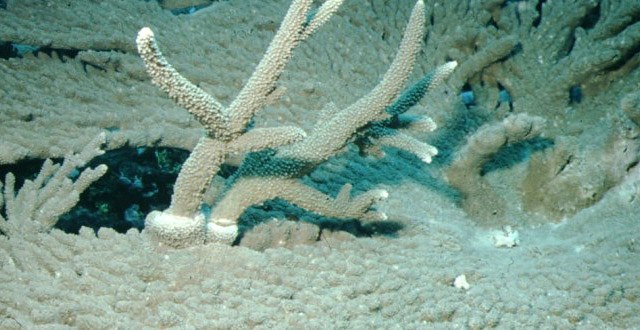 Acropora is adapted to growing fast and excelling in competition (shown here), but it ultimately loses when the physical environment changes to become more harsh. (photo courtesy C. Birkeland)

Safety in Numbers? Not so for corals.

Traditionally, it was assumed that corals do not face a risk of extinction unless they become very rare or have a very restricted range. A team of scientists from the University of Hawai‘i at Mānoa (UHM), Joint Institute for Marine and Atmospheric Research (JIMAR), and the National Oceanic and Atmospheric Administration (NOAA) has revealed that global changes in climate and ocean chemistry affect corals whether scare or abundant, and often it is the dominant, abundant corals with wide distributions that are affected the most.

The researchers evaluated both the geologic record of past extinctions and recent major events to assess the characteristics of dominant corals under various conditions.  They determined that during periods advantageous to coral growth, natural selection favors corals with traits that make them more vulnerable to climate change.

The last 10 thousand years have been especially beneficial for corals. Acropora species, such as table coral, elkhorn coral and staghorn coral, were favored in competition due to their rapid growth. This advantageous rapid growth may have been attained in part by neglecting investment in few defenses against predation, hurricanes, or warm seawater.   Acropora species have porous skeletons, extra thin tissue, and low concentrations of carbon and nitrogen in their tissues. The abundant corals have taken an easy road to living a rich and dominating life during the present interglacial period, but the payback comes when the climate becomes less hospitable.

Researchers from the UHM School of Ocean and Earth Science and Technology (SOEST); the National Marine Fisheries Service (Southeast Fisheries Science Center, Northwest Fisheries Science Center, and Pacific Islands Fisheries Science Center); NOAA National Ocean Service; and NOAA Coral Reef Watch propose that the conditions driven by excess carbon dioxide in the ocean cause mortality at rates that are independent of coral abundance. This density-independent mortality and physiological stress affects reproductive success and leads to the decline of corals. Some coral species are abundant across a broad geographic range, but the new findings show that this does not safeguard them against global threats, including changing ocean chemistry and rising temperatures.

Nearly all the assessments and evaluations of the risk of extinction for a species of coral are made on the basis of how scarce or restricted in range it is. However, the new findings highlight the vulnerability of abundant and widely dispersed corals as well as corals that are rare and/or have restricted ranges.