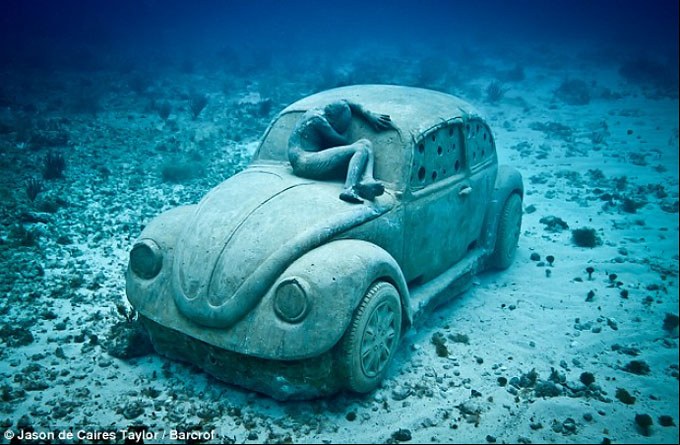 Inspired! An artificial reef in the shape of a life-size VW Beetle (“Bug”)

The life-sized VW Bug replica (with a sculpture of a person on the windshield) is the latest addition to the Cancun Underwater Museum.  Engineers carefully lowered the 16,000lb showpiece 26 feet below the waves of  Manchones Reef, Mexico.  The exhibit was specifically designed to serve as an artificial reef for fish, crustaceans, and the recruitment of hard and soft corals alike.

Below is a diagram of the design elements, as well as a photo of the concrete vehicle being slowly sunk into position onto the sandy reef floor.

Before its even in place, fish are already clamoring to swim in their new playground!

So what is the Cancun Underwater Museum?

The project founded by Jaime Gonzalez Cano of The National Marine Park, Roberto Diaz of The Cancun Nautical Association and Jason deCaires Taylor, now consists of over 400 permanent life-size sculptures, one of the largest and most ambitious underwater artificial attractions in the world.

The main goal of English artist Jason Decaires Taylor’s work is conservation.  Each of the 400 life sized sculptures are made from ph neutral clay in order to promote the growth of coral reef and marine life with the total installation occupying an area of over 150sq metres and weighing over 120 tons.

Here is a beautiful video of some of the awe-inspiring exhibits found at the Cancun Underwater Museum.  The video shows footage of the construction and installation processes, including the construction of the VW bug.