The Wonder of Beginnings

Close your eyes. Okay, read this, then close your eyes. Imagine a time where you saw something that you found mesmerizing – something that made you want to learn how to do something new. It could have been someone making a cake, wood working, playing a sport or a video game. For many of us, the first thing that comes to mind may be the first visit to an aquarium or beach. How did you feel? Excitement? Optimistic? Eager? Curious? Hold on to that feeling. 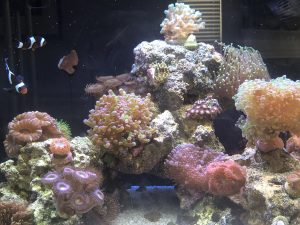 “Enjoy the wonder of beginnings” is a piece of advice that I wish I had been given when I started out. I set up my first saltwater tank very quickly.  That tank was beautiful, but I have very few memories of the tank or its setup. I was constantly reading and researching what I could do or should do for the tank to solve “issues”. This left me with no time looking at my tank and just enjoying it.

I did not take the time to appreciate the healthy biome I had made for some of the most delicate animals in the world – in a tiny box in my house. All that being said, my research paid off – the corals were overgrown in months and coral warfare was breaking out everywhere. I again rushed to upgraded to my 60-gallon cube to give my pets more space. 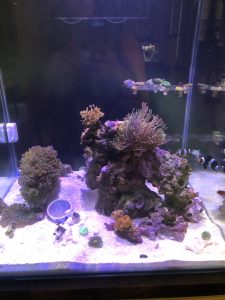 I was never completely happy with the 60 gallon cube because it was so rushed. The tank was a spur of the moment Facebook market place buy, that I picked up the day I found it – with no research into size and shapes of tanks. I didn’t take time to plan out the aqua scape. The sump had some design flaws that made it hard to use and prone to overflows. My plan changed several times as I got differing advice from fellow hobbyists who had amazing setups and whose opinions I respected. Despite all the ups and downs, I learned a lot about reefing, equipment, tank maintenance, and reef tank design. The mantra that “Nothing good happens fast in a reef tank” took on new significance. I knew that my next tank would be more planned and well thought out, but I still wish I had slowed down just a bit to appreciate the build.

Rushing the next tank again

Our hobby is rife with maxims and axioms. One I have experienced is “Every aquarium hobbyist wants n+1 tanks, where n is the number of current tanks.” I think planning my next tank upgrade took away some of my enjoyment of that 60 gallon cube. Instead of seeing how beautiful the tank was, I imagined how much better everything would be once I had a bigger tank. Instead of seeing the wonder of what was, I only saw the potential of what could be. I again missed the beauty of the creation process.

When I upgraded to my current tank, I took more time to enjoy the initial build process. Even then, I felt a lot of pressure to get the tank up and running and looking great. When the tank sat empty for a few days, people wanted to know why I was taking so long to get it set up. I know everyone was as eager to see this tank sat up as I was, but I really wish someone had told me to enjoy my creative process. I had harnessed nature in my house!

@the.TeacherReefer was a guest on @Shoomiesreef’s Monday, January 31st Instagram livestream. At that point, he was getting ready to start his first reef tank. He had been planning and collecting equipment for months and strategizing ways to minimize the “ugly stages”. Throughout the stream, I reflected on my own journey and realized how much I did not remember. At the end, Shoomie asked us to share a piece of advice with him. I told him to enjoy the beginning. So many of us want to have a beautiful thriving tank immediately. We rarely take opportunities to enjoy the wonder of what we are creating in our homes at the time we are creating it and living through the “uglies”. While I know @the.TeacherReefer was understandably eager to get the tank set up, I encouraged him to take pauses and appreciate what he was creating as he was creating it, even if it didn’t go to plan. Enjoy the process even when the process isn’t pretty. See the wonder of what is currently happening in the tank instead of only focusing on the beauty of what will be.

After giving that advice, I got to thinking more about the “ugly stages”. How could I reset the narrative without giving bad advice. Is the ugly stage actually bad? I began digging into scientific journals concerning succession of manmade reefs. Surely these structures would follow some of the same pathways our tanks do. 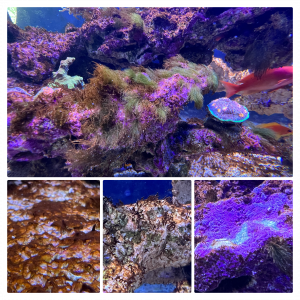 Many bacterial and algae species play a role in the lead up to a healthy stable reef environment. Bacteria play an important role in the nitrogen cycle and coral health. Routine maintenance such as water changes and scraping the glass appear to have little impact on the healthy bacterial climax community. Marine biologists have found that the algal climax community plays a significant role in future coral health (1). Coralline algae growth is directly related to the development of a healthy stable coral climax community, while fleshy algae rarely ends in a stable coral reef community. Increased nutrient levels in connection with algae grazers results in the most coralline growth, paving the way for a healthy ecosystem for corals. While the bacterial and algal succession species may not be attractive, they may be an important step in the development of a healthy reef tank.

There has been a lot of talk in recent years about the “ugly stages” of a reef aquarium. Conversations revolve around the causes, minimizing and avoiding the uglies altogether, and even whether the ugly stage is an important part of a salt water tank’s maturation. At this point, I believe the uglies are a natural component of setting up a healthy salt water tank. Just as the nitrogen cycle cannot be avoided, I do not believe that intentionally avoiding the ugly stages is the best option. The “ugly stages” is ecosystem succession that is occurring in a matter of days, weeks, and months. Just as an empty field can eventually become a beautiful forest, our tanks are setting up the right biome to care for delicate creatures.

Reaching the desired coral climax community may be impeded by fleshy algae taking the dominant role. Algal succession did not occur as planned, but it does not mean that a reef keeper has done things wrong. Just as climax communities can bifurcate in the real world, it can occur in our tanks. This is wondrous. It is something to admire about our natural world and can help us appreciate it more deeply.

Our goal as reef hobbyists is to guide succession towards one of many climax community options. Many reefers can feel frustrated when the desired algal climax community is not established in a few weeks or months. I believe this is related to current perspectives on the “ugly stages”. Instead of thinking of the “uglies” as something to be avoided, we should talk about it in terms of climax communities. The desired climax community can always be reached, but it may require more time and husbandry/manual removal in some situations.

Whether you are brand new to the hobby, starting a new tank or have a beautiful, fully grown reef tank, I want to give you a new piece of advice. Build time to enjoy the wonder of this hobby – even when nature decides to take the course you have not planned.