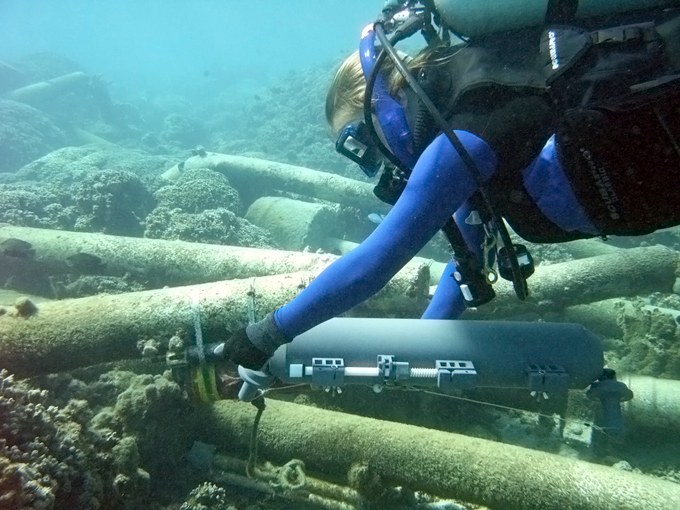 UCSB graduate student Emily Rivest positions a SeaFET pH sensor in a coral reef off the island of Moorea, in French Polynesia. The large cement posts once held up a pier that toppled over the reef; one of the fallen posts provides an anchor for the sensor. The grey bottle is used to collect seawater samples for chemical analyses that augment the pH data. The reefs surrounding the island of Moorea are home to UCSB’s Coral Reef Long-Term Ecological Research site (MCR LTER).  Credit: Anderson Mayfield

Read the findings of the UCSB study in PLoS ONE.

(Santa Barbara, Calif.) –– Might a penguin’s next meal be affected by the exhaust from your tailpipe? The answer may be yes, when you add your exhaust fumes to the total amount of carbon dioxide lofted into the atmosphere by humans since the industrial revolution. One-third of that carbon dioxide is absorbed by the world’s oceans, making them more acidic and affecting marine life.

A UC Santa Barbara marine scientist and a team of 18 other researchers have reported results of the broadest worldwide study of ocean acidification to date. Acidification is known to be a direct result of the increasing amount of greenhouse gas emissions. The scientists used sensors developed at Scripps Institution of Oceanography at UC San Diego to measure the acidity of 15 ocean locations, including seawater in the Antarctic, and in temperate and tropical waters.

As oceans become more acidic, with a lower pH, marine organisms are stressed and entire ecosystems are affected, according to the scientists. Gretchen E. Hofmann, an eco-physiologist and professor in UCSB’s Department of Ecology, Evolution & Marine Biology, is lead author of the recent article in PLoS ONE that describes the research.

“We were able to illustrate how parts of the world’s oceans currently have different pH, and thus how they might respond to climate changes in the future,” said Hofmann. “The sensors allowed us to capture that.” The sensors recorded at least 30 days of continuous pH values in each area of the study.

Since the beginning of the industrial revolution, human activities have accelerated the release of carbon dioxide into the atmosphere as carbon dioxide mixes with water. The two molecules combine to become carbonic acid, making seawater more acidic. As billions of molecules combine and go through this process, the overall pH of the oceans decreases, causing ocean acidification.

Acidification limits the amount of carbonate forms that are needed by marine invertebrates, such as coral, urchins, snails, and shellfish, to make their skeletons. As the concentration of carbonates decreases in acidified water, it is harder to make a shell. And, the structures of some organisms may dissolve when water chemistry becomes too unfavorable.

“The emerging pH data from sensors allows us to design lab experiments that have a present-day environmental context,” said Hofmann. “The experiments will allow us to see how organisms are adapted now, and how they might respond to climate change in the future.”

The image shows a SeaFET pH sensor deployed underneath approximately 12 feet of sea ice in McMurdo Sound, Ross Island, Antarctica, in Oct. 2010. Scientists use these sensors to identify the natural dynamics of ocean pH in order to better understand how marine organisms may be impacted by climate change. The black object is the sensor, which is anchored to the ocean bottom using weights. Along the ocean bottom, worms and sea stars are visible. Credit: Rob Robbins

Hofmann researched the Antarctic, where she has worked extensively, as well as an area of coral reefs around the South Pacific island of Moorea, where UCSB has a Long-Term Ecological Research (LTER) project. She also studied the coastal waters of Santa Barbara, in conjunction with UCSB’s Santa Barbara Coastal LTER. The research team provided 30 days of pH data from other ocean areas around the world.

The researchers found that, in some places such as Antarctica and the Line Islands of the South Pacific, the range of pH variance is much more limited than in areas of the California coast that are subject to large vertical movements of water, known as upwellings. In some of the study areas, the researchers found that the decrease in seawater pH being caused by greenhouse gas emissions is still within the bounds of natural pH fluctuation. Other areas already experience daily acidity levels that scientists had expected would only be reached at the end of this century.

“This study is important for identifying the complexity of the ocean acidification problem around the globe,” said co-author Jennifer Smith, a marine biologist with Scripps. “Our data show such huge variability in seawater pH, both within and across marine ecosystems, making global predictions of the impacts of ocean acidification a big challenge.”

Todd Martz, a marine chemistry researcher at Scripps, developed the sensor. “When I arrived at Scripps, we re-engineered my prototype design, and since then I have not been able to keep up with all of the requests for sensors,” said Martz. “Because every sensor used in this study was built at Scripps, I was in a unique position to assimilate a number of datasets, collected independently by researchers who otherwise would not have been in communication with each other. Each time someone deployed a sensor, they would send me the data, and eventually it became clear that a synthesis should be done to cross-compare this diverse collection of measurements.” Hoffman worked with Martz to put together the research team to create that synthesis.

The team noted that the Scripps sensors, called “SeaFET” and “SeapHOx,” allow researchers to continuously and autonomously monitor pH from remote parts of the world, providing important baselines from which scientists can monitor future changes caused by ocean acidification.

Despite surveying 15 different ocean regions, the authors noted that they only made observations on coastal surface oceans, and that more study is needed in deeper ocean regions farther away from land.

Funding for instrument development and related field work came from several sources, including the National Science Foundation, the David and Lucile Packard Foundation, the University of California, the Gordon and Betty Moore Foundation, the Nature Conservancy, the WWW Foundation, Scott and Karin Wilson, the Rhodes family, and NOAA.