Depending on how you define “smallest,” these are the top contenders for world’s smallest fish:

If you thought reef gobies of the genus Trimma were tiny, Trimmatoms have them beat. The genus currently contains seven species.  The smallest is Trimmatom nanus.  T. nanus lives up to its namesake, growing to only 10 mm (0.39 in); for reference, that’s less than the thickness of a common pen or pencil! For decades, it was the world’s smallest known fish and vertebrate.  With the discovery and description of two new species in 2004 and 2006, T. nanus was knocked down to third place.

The second smallest fish calls the Great Barrier Reef its home: Schindleria brevipinguis (2004). Unlike most reef fish, S.brevipinguis is as unassuming and dull as a fish gets; it really looks more like plankton than fish.  Drab as it may be, it holds the current title as the world’s smallest saltwater fish at just 8.4 mm (0.33 in).

And the smallest fish in the world is …

Paedocypris progenetica (2006, pictured below and to the right) is regarded to as the world’s smallest fish (and debatably the world’s smallest vertebrate), growing to an average adult size of 7.9 mm (0.31 in) with the largest specimen recorded at just above 10 mm (0.39 in).  It is a freshwater fish that lives in the peaty swamps of Sumatra, Indonesia.

Now you have more fishy trivia to impress your friends 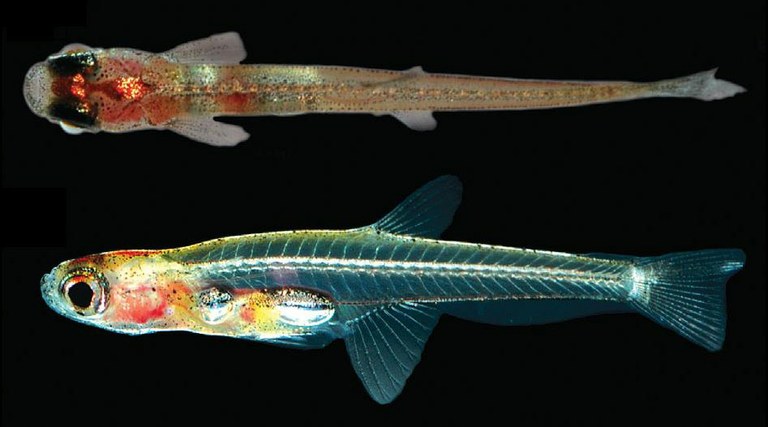