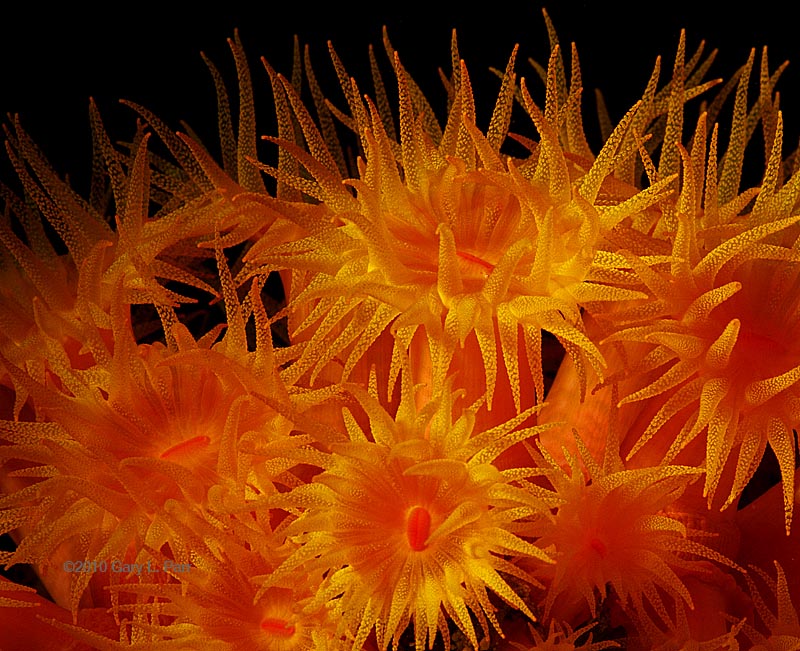 As common names go, few corals carry a more accurate name than the Sun Coral moniker often applied to Tubastrea coccinea and Tubastrea aurea. Their yellow and orange colors are unmatched by any other sessile invertebrate.
When photographing my Tubastrea colony, the challenge was not to deliver the brilliant colors. That’s relatively easy to do. The extra component I wanted to add was to convey the translucency and delicacy of the tissue without giving up any color intensity. Several previous attempts didn’t deliver the image I wanted, so I decided to do a little “shooting in the dark.”
The first step was to haul my butt out of bed when it was completely dark and the polyps were in full “bloom.” This time of day/night also allowed me to have complete control over the amount and direction of light that would illuminate the colony.
Composition was also a challenge, as it is with all colony photos. Basically, it’s difficult to determine what to include and what to leave out. For this shot I wanted to show polyps at several angles and to have the top of the image be extended tentacles against a black background.
Once I found the desired arrangement, I used a diffused remote flash, placed to the side and slightly behind the polyps, to bring out that translucent glow that I felt would make the image a level better than what I’d been able to achieve previously. I made four images, each with the flash in a different position. The image I chose from the four is one of my favorite coral shots because, to me, it makes the polyps look like a small cluster of suns.
Technical details: 1/30 sec., f/18, ISO 400 , 7D, Sigma EX180 macro, diffused remote flash, remote release, tripod.–Gary L. Parr, www.gparr.com, www.reefthreads.com