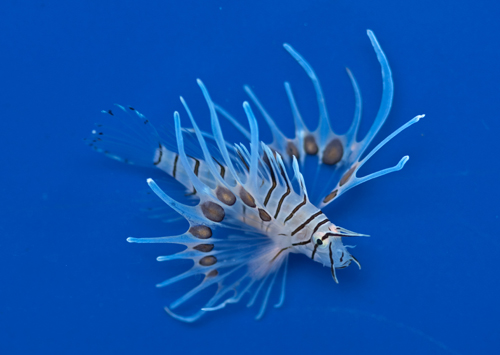 What can it mean that after a complete absence of lionfish around Long Island, New York, for the last three years, they have suddenly reappeared?

…probably nothing. While the Indo-Pacific lionfish, Pterois volitans has continued to spread throughout the Atlantic and Caribbean, and localized attempts to control their populations have met with mixed results, their occurrence in the northeast is probably not a great indicator of the overall health of the Atlantic population. Just as with angelfishes, tangs, and other stray tropicals caught up as eggs and larvae in the Gulf Stream, some years we get them and some years we don’t.  The currents of the North Atlantic Gyre have been instrumental in the spread of the lionfish (as well as many of our native species), and if a spawning event coincides with a mass of water that is destined for Long Island (or any island), then the offspring will end up there.

Yesterday afternoon while diving on the Ponquogue Bridge in Hampton Bays with Noel Heinsohn of the Long Island Aquarium, we came upon this tiny post-larval specimen clinging to one of the concrete bridge pilings. Check out Noel’s Go-Pro video of the capture: Todd catches a lionfish

On the way home, I stopped at the Hampton Dive Center to refill my tank. After telling the crew there about the catch of the day, one of them reported that she had seen a small lionfish hanging around a buoy line at an off-shore wreck last weekend. With two sightings this early in the season, I expect we will see a lot more lionfish this year. For more information on the lionfish invasion, check out Ret Talbot’s article in this month’s issue of Coral Magazine.