This is why the crown-of-thorns starfish are so nasty 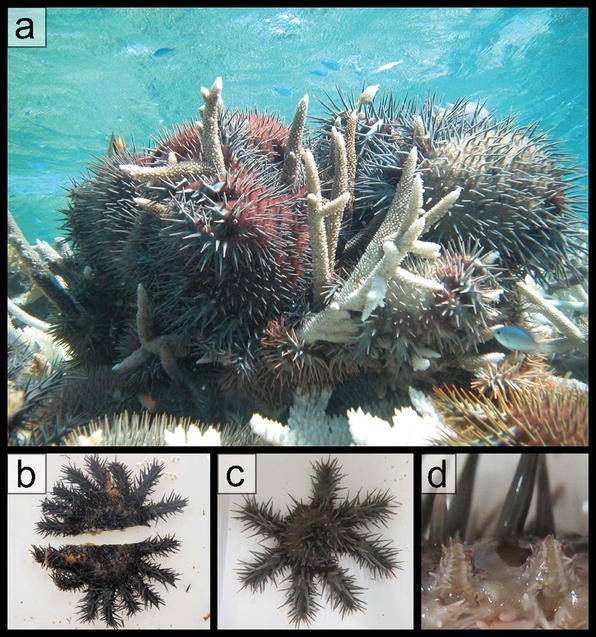 a Acanthaster planci outbreak on the Great Barrier Reef; b A. planci cut into two equal halves; c after 7 weeks, both halves (only one pictured, one arm lost) were almost entirely healed; d A. planci starting to regenerate new arms after 6 weeks


Crown-of-thorns starfish (Acanthaster planci) are one of the most significant threats to coral reefs in the western Pacific with the exception of storms. Controlling their numbers is one of the single most important actions that can make a difference in saving many reefs.  Back in the 1960’s it was a common control practice to cut A. planci up into pieces as a way of destroying them. However, anecdotal reports began coming in stating these starfish may regenerate from cut up pieces, similar to many other starfish species.

In their paper “Capacity for regeneration in crown of thorns starfish, Acanthaster planci” researchers Messmer, Pratchett, and Clark investigated this ability in aquarium experiments.  They cut up A. planci into pieces of various sizes ranging from just cutting them in half to cutting them in thirds. These pieces were monitored over a 7-week period in flow-through aquariums. The pieces cut into thirds died within three days with a 100% mortality rate. However, pieces cut into 2/3 or 1/2 retained a 75% survivor rate with noticeable healing appearing at the cut areas. Survivorship appeared better if a significant amount of the oral disc remained on the cut pieces.

This research indicates that clearly these starfish can regenerate from cut sections and that current eradication methods using sodium bisulfate, and possibly TCBS agar, are still the most effective way to destroy these coral lawnmowers.