You Thought Your Sex Life Was Bad? Talk to the Male Anglerfish 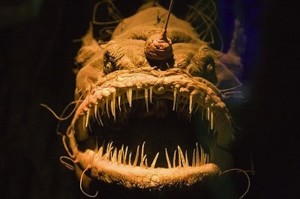 Ever meet someone who just makes your insides melt? I mean you buckle at the knees and your whole world just goes aflutter and you’d do just about anything for said individual? Well anglerfish take this notion to the extreme. These poor little guys may just be the most whipped species in existence – they literally spend their limited lifespan in search of the perfect woman (since we’re talking anglerfish – this means a grotesque, jagged-toothed, burly lass – but to each their own) to latch onto and devote their entire being. 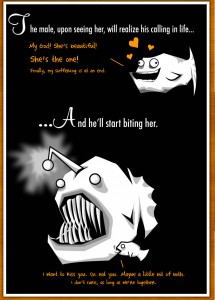 No, this isn’t new news, but it’s fascinating nonetheless for those unfamiliar with the mating habits of these pelagic fish. Some male anglerfish, like Ceratiidae, or “Sea Devils”, are intriguing little bony fish – they’re incompetent when it comes to predation, basically starving the majority of their lives, yet they have an extraordinary olfactory sense when it comes to the ladies. He sniffs out a satisfactory partner and bites her (how kinky). After latching on to his siren he essentially hands over his testicles, becoming nothing more than a permanent appendage – a sperm factory. 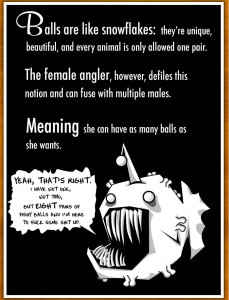 You see, after our little pheromone-driven friend bites the girl of his dreams, he starts to melt. Literally – the male releases an enzyme, digesting the skin of his mouth and her body until they are fused on a vascular level. He then is completely reliant on his lady, absorbing nutrients through their shared circulatory system (since we mentioned earlier he isn’t the most adept predator, this may just be a treat for him), and in return providing sperm for the female for multiple spawning. Now, the female anglerfish is a bit of a hussy if I’m going to be honest – anglerfish utilize a polyandrous mating system with some females incorporating up to eight males simultaneously! Good luck getting your stories straight, female anglerfish.

While parasitic mating isn’t the only form of copulation for anglerfish species, it’s certainly the most tragic (for the male, anyways).