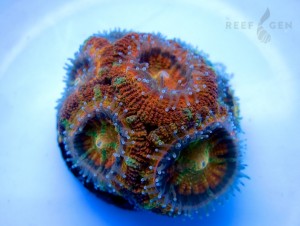 This the third post in a series regarding Thraustochytrids and their role in coral symbiosis. This post we will look at another rarely looked aspect of our aquarium care, the nutrient sulfur.

One element that Thraustos are believed to utilize in some quantity is sulfur. Sulfur, along with nitrogen, phosphorous, and potassium, is one of the most important elements to life.  Sulfur is present in the make up of all proteins. Plants and animals cannot grow without sulfur.

In our aquariums, sulfur is provided by water changes, feeding, and some additives, however there are example of deliberate sulfur dosing leading to better outcomes for coral health.

In the 50s and 60s they would ship Manicina rose coral from the Caribbean along with Butterfly fish they sold in order to keep the fish fed. The key to keeping the rose coral alive was to put rock sulfur in the aquarium or marine system. This is consistent with the findings of several papers, that corals assoiciatted closely with the ocean floor in sand or rubble, often had high percentages of Thraustochytrids.

Rose coral are often found growing in the sand, especially with seagrass.  As those with deep sand beds know, if you disturb the sand in the deeper layers you may catch a whiff of the rotten egg smelling sulfur dioxide. Sulfur is in every protein, and proteins make the stuff of life. The live sand bed is full of life, therefor full of sulfur, among other elements. With the coral’s close association with the nutrient rich substrate, the Thraustochytrids have a perfect place to set up shop. The coral provides the main limiting nutrient, carbon, in the form of glucose and other sugars (originally produced by the corals other symbiont, zooxanthellae), to the Thraustochytrids, who then utilize sulfur and other elements from their surroundings to grow and produce fatty acids and vitamins, which the coral then consume continually throughout the day.

Perhaps in the future we will have a ready supply of commercial products designed to deliver sulfur to and other critical nutrients to the Thraustochytrids, and perhaps awarding us with greater success with more species of coral.