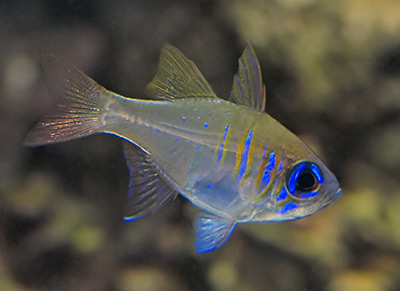 Walk by an LFS sales tank containing a few specimens of threadfin cardinalfish (Zoramia leptacantha), and you might not give them a second glance. Chromatically speaking, this species isn’t exactly a showstopper compared to some, especially when viewed in your average LFS environment. But don’t let this cardinal’s unassuming appearance fool you; it can make for an impressive display species when kept in groups.

Physical traits: Z. leptacantha is a diminutive fish, reaching only about 2.5 inches in total length. It’s laterally compressed and has two dorsal fins, the first fairly elongated relative to the second. As mentioned, this species’ color is nothing to write home about (in case you’re one of those types who like to write home about the colors of fish). It’s semi-transparent to yellowish-silver overall with iridescent blue around the eyes as well as blue and yellow accents on the anterior portion of the body. MORE