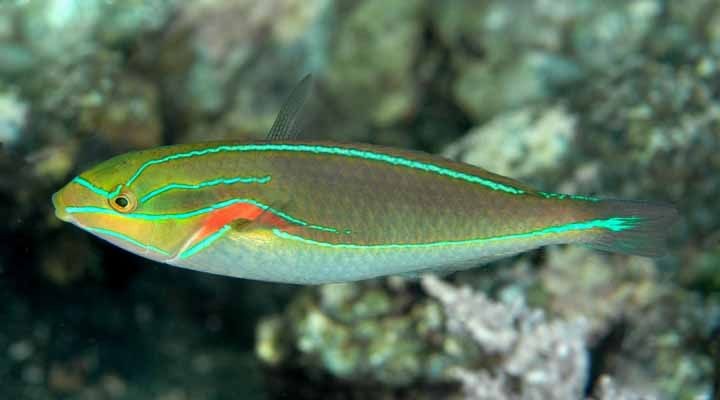 
By flapping their fins in a figure-eight pattern, bluelined wrasses can travel at high speeds while using 40 per cent less energy than tunas of the same size.

“For a long time, people thought the best high-speed swimmers were the fishes cruising in open waters, like mackerel and tunas,” says Dr Chris Fulton from the ARC Centre of Excellence for Coral Reef Studies and The Australian National University.

“Our study shows that these coral reef wrasses, by virtue of their unique wing-like fins, can maintain very similar speeds at a dramatically lower energetic cost,” he says.

The researchers’ discovery could help revolutionise robot submarine technology by reducing how much energy is needed to propel objects underwater.

Current Autonomous Underwater Vehicles (AUVs) use propellers or jets at the back. “By replacing these with fins at the front to mimic how the bluelined wrasses flap their fins, we could propel robots with less power, saving on batteries and increasing their range,” Dr Fulton says.

Dr Fulton explains that fish like tunas and mackerels move their bodies and tails to propel themselves through the water. While this method enables them to swim fast, it can come at a high energetic cost.

“Another way fish swim is to use their pectoral fins, those at the front of their body, to produce thrust,” says Dr Fulton. “Fishes that do this with rounded fins tend to paddle their fins back and forth, almost like how we row a boat: they hold their fins out and pull back in a power stroke, then collapse their fins and bring them forward for a recovery stroke. This means they are producing thrust only half the time.”

Bluelined wrasses, however, flap their tapered fins in a figure eight pattern that produces thrust on every stroke, making it far more energy efficient.

“This figure-eight fin sweep allows the bluelined wrasse to create a lift force as the water flows over their fins, in a very similar way to how birds fly through the air. This means the fish are literally flying underwater.

“They also hold their body rigid while swimming to make it as streamlined as possible. They only flap their fins, slightly adjusting the angle so as to cruise along without burning up a lot of energy.”

The study shows that bluelined wrasses stand out as the highest performing swimmers for their size with respect to optimum swimming speed and energy consumption, Dr Fulton says.

Such extreme performance appears to be linked with the fish’s habitat, he says. Unlike many tail-swimmers that dwell in the open ocean, these wrasses live on shallow coral reefs where they experience some rough treatment from waves breaking over the reef.

“Most people think that coral reefs are idyllic places for fish to live, but dwelling in these shallow waters means they often experience extreme water flows generated from waves,” Dr Fulton says.

“It’s almost like living with constant winds from a cyclone – you can just imagine what it’d be like to try and find food and get home in that sort of weather!”

Having a smart swimming technique has ensured these small reef fish have an evolutionary advantage in the marine environment, Dr Fulton says.

“Fish use up to half of their energy on swimming. So if they can save even just a fraction of this, they can spend it on growing bigger, holding larger territories and producing more offspring,” he says.

“Just imagine if you could save 40% on the petrol bill for your car – how good would it be to spend that spare cash on other things?”

“We know fish with these wing-like fins dominate shallow reefs around the world, where in some cases they can be about 10 times more abundant than fishes with paddle-shaped fins.”

The study “Energetic extremes in aquatic locomotion by coral reef fishes” by Christopher J. Fulton, Jacob L. Johansen and John F. Steffensen is published in the latest issue of PLoS ONE.