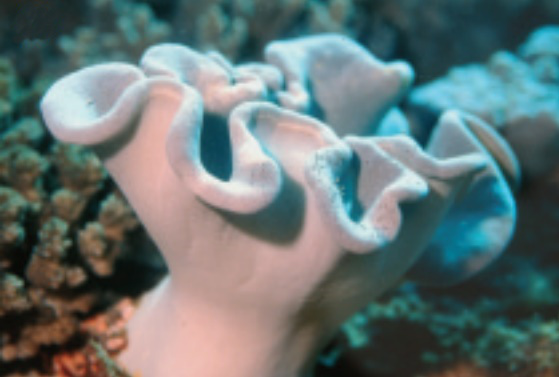 Zoological taxonomy is not for the feint of heart. Take, for instance, the humble Toadstool Coral— a stalwart soft coral recommended to every rookie reef aquarist. Despite the ubiquity and importance of these corals in reef ecosystems, our understanding of their evolutionary relationships is in a nascent stage. There are no field guides enabling easy identification, and, in all likelihood, there never will be. Recent molecular study has shown that our current system for classifying the Toadstool Corals and their allies is inherently wrong in many different and important ways.

If you’ve ever purchased one of these at an aquarium store, you’ve likely noticed that there is usually no attempt at a species-level identification, nor do we see the kind of fanciful common names so abundant elsewhere in this hobby. No Strawberry Shortcake Toadstool. No Superman Toadstool. No Green Death Toadstool. The Fiji Yellow Toadstool is the only exception. This is in spite of the fact that many distinctive phenotypes regularly show up. If Eskimos have fifty words for snow, why is there but one word for this diverse group of corals?

Alas, our naming troubles are to be found amongst the scientific community as well. There are perhaps a handful of people on the planet right now with any real expertise in these corals (note: I am not one of these people), and the general consensus is that we don’t really understand the boundaries between species. One recent molecular study found that what had previously been considered a single variable taxon was in fact comprised of no less than six distinct and distantly related lineages. Ex uno, plures.

The situation is equally unclear when considering the genus-level classification. As any coral nerd worth their salt can tell you, Toadstool Corals are in Sarcophyton, the similar Devil’s Hand Corals are in Lobophytum, and never the twain shall meet. But it turns out, the twain do meet. Instead of two discrete morphologies, there is really more of a continuum of shapes blending these two extremes. Sarcophyton, in its purest form, does indeed look much like a toadstool and can be recognized in possessing a stalk upon which sits a smooth cap (=polypary or capitulum). Lobophytum, on the other hand (pun), have a heterogenous look which is perhaps best described as untoadstool-like, with some species being tall and fingerlike and others being flat and ridged. 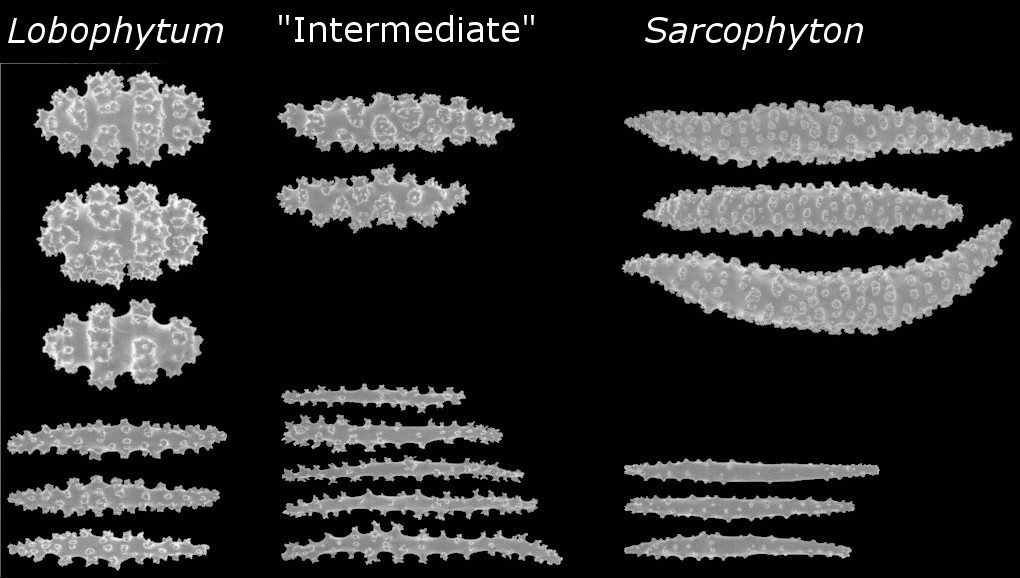 Comparing subsurface sclerites of the three major clades. Upper row is from the polypary, lower row is form the stalk. Modified from McFadden et al 2006.

Of course, such broad generalities are inadequate when it comes to serious taxonomic study. Definitive identification requires examination of the microscopic calcium spicules which help to physically support these corals, and it’s here that we begin to see the crux of the problem. The spicules within the polypary of Sarcophyton are large and spindle-shaped, while those in the base are relatively thin and smooth. Compare this to Lobophytum, which has its polypary bearing squat, ovular sclerites and those within its stalk being thicker and bumpier.

There is a third group, which has sclerites showing a mix of these features and a colony shape that can vary from toadstool-esque to those with an unfamiliar flattened form. These enigmatic intermediates, of which there are more than a dozen known, form a single clade at the base of this branch of coral life, suggesting that their confused morphology is likely the ancestral state in this group. 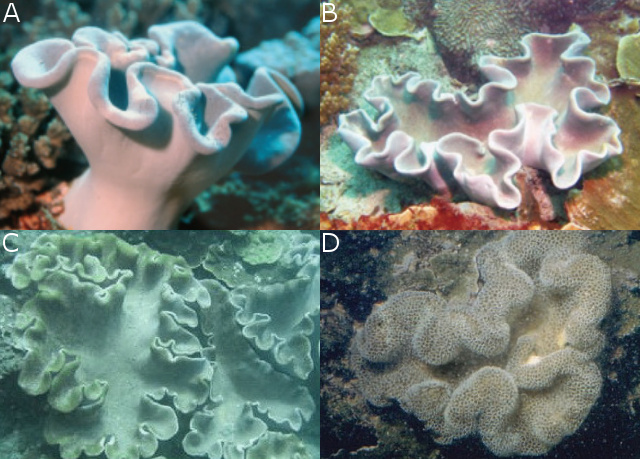 One such coral, which appears to be commonly available in aquarium stores, is “Sarcophyton” ehrenbergi. If you google this name right now, you’ll find that this is one of the more popular taxonomies thrown about by aquarists. It would seem that just about every possible phenotype has now had this appellation attached to it, such that “ehrenbergi” has become the lingua franca of toadstool species identifications. But this coral is actually rather distinctive, in its own manner. Rather than having a flattened polypary which overhangs the stalk—visualize an actual mushroom here—“Sarcophtyon” ehrenbergi has more of a cup-like shape, with a stalk that gently expands into the thin perimeter of the polypary. Think of this as more of a vase than a toadstool. Larger specimens develop convolutions along this edge, giving a ruffled appearance to the coral.

Another distinctive phenotype in this intermediate clade can be seen in species like “Lobophytum” patulum, variatum & hseihi, which have a flattened shape with variably present fingers, lobes or ridges. There wouldn’t be much reason to confuse these with the typical Toadstool Coral, though they are nonetheless confusing. These are not the most eye-catching of soft corals, and I can’t recall ever seeing one available in the aquarium industry, though undoubtedly they have been. One for the true coral connoisseur, I suppose.

Lastly, there are species like “Lobophytum” schoedei, mortoni, and sarcophytoides, which, as the name sarcophytoides should have hinted at, are very Sarcophyton-like. But, whereas in that genus the polypary is flattened or ruffled along the edges, the ruffled edges of these “Lobophytum” are more vertical and structured, being vaguely reminiscent of fingery species like Lobophytum hirsutum, one of the true Devil’s Hands. Again, these almost certainly show up now and then as aquarium exports, probably being innocuously sold as “Toadstool Corals”.

It will likely be some time before these corals are formally revised and the intermediate clade is given a proper scientific name. Until then, these pseudo-toadstools are stuck in taxonomic limbo, and maybe the best way for aquarists to refer to these is with a common name. Seeing as none exists, allow me to coin one: the “False Toadstool Corals”.