Gobies are by far the most diverse group of reef-associated fish; however, only a small number of species ever find their way into the aquarium trade. This is particularly true for the smaller members of the family. For instance, there are currently 113 recognized species of Eviota dwarfgoby, but you’ll only ever see a couple of these regularly available. And the situation is not much different among the Trimma pygmygobies—of the 100 species in this genus, only a handful are typically collected.

And if that wasn’t bad enough, recent studies have shown that we are likely grossly underestimating the true biodiversity in these genera. Small gobies are difficult to study and often go overlooked, which can sometimes result in new species being discovered in some very obvious places, like in the shallows of popular dive sites. Molecular data suggests that there may be upwards of 200 distinct species in Trimma alone, making it perhaps the single largest genus of reef fish. Unlike their drab cousins in Eviota, the pygmygobies are often exotically colored and patterned creatures which many aquarists would find highly desirable. So let’s take a moment to appreciate some of the more spectacular examples in this group. 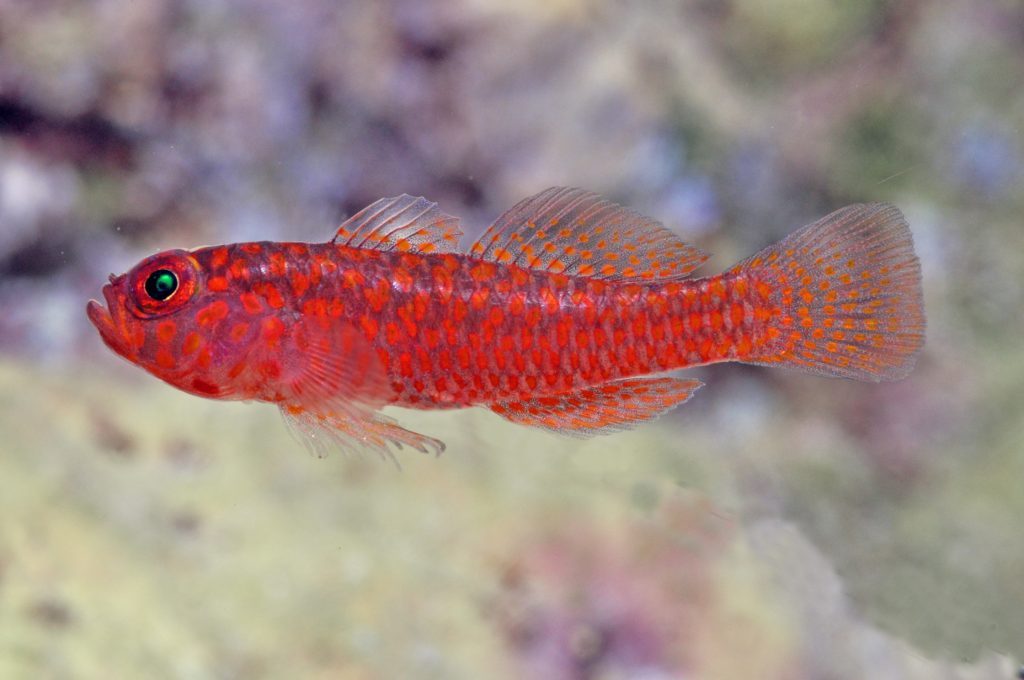 Trimma readerae (or perhaps something near to it?). Credit: Gerry Allen & Mark Erdmann

The Red-Spotted Pygmymgoby (Trimma readerae) is arguably the nicest of the many red-spotted species in this genus, though, in spite of its dashing good looks, it wasn’t scientifically described until 2015. There’s still much that we have yet to learn about it. Thus far, it’s known primarily from around Australia and nearby portions of Papua New Guinea, but similar specimens have been reported from all across the West Pacific, including Indonesia, Japan and even the Marshall Islands.

Quite a few Trimma feature a predominantly yellow body, and it’s hard to pick a favorite in the bunch. There’s something about these tiny xanthic gobies that is particularly pleasing to the eye. It’s as if they pack all the beauty and vibrancy of a Yellow Tang into a minute, one-inch package. The Three-eyed Pygmygoby (Trimma trioculatus) is a widespread species known from scattered locations in the Coral Triangle. It occurs on steep outer reefs, where many of the most attractive pygmygobies seem to hide.

The Candycane Pygmygoby (Trimma cana) is one of the few species that is regularly collected for aquarists. In the wild, it often occurs in small groups, generally in association with stony corals (particularly merulinids, like Echinopora). As the video illustrates, this species sometimes adopts an unusual jerky behavior, but why? 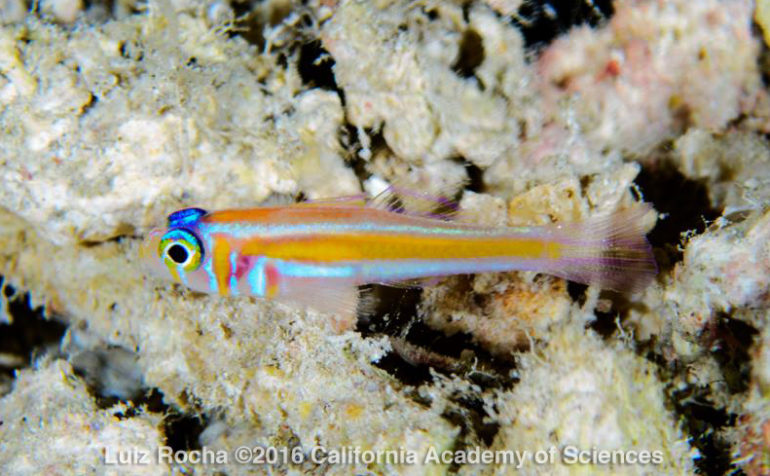 There are many, many undescribed species in this genus, and a particularly good place to find new ones are in deeper mesophotic habitats. On a recent expedition to Palau, Dr. Luiz Rocha succeeded in capturing this gorgeous image of a little-known fish which had previously been encountered twenty years prior. It occurs at a staggering 400 feet deep! 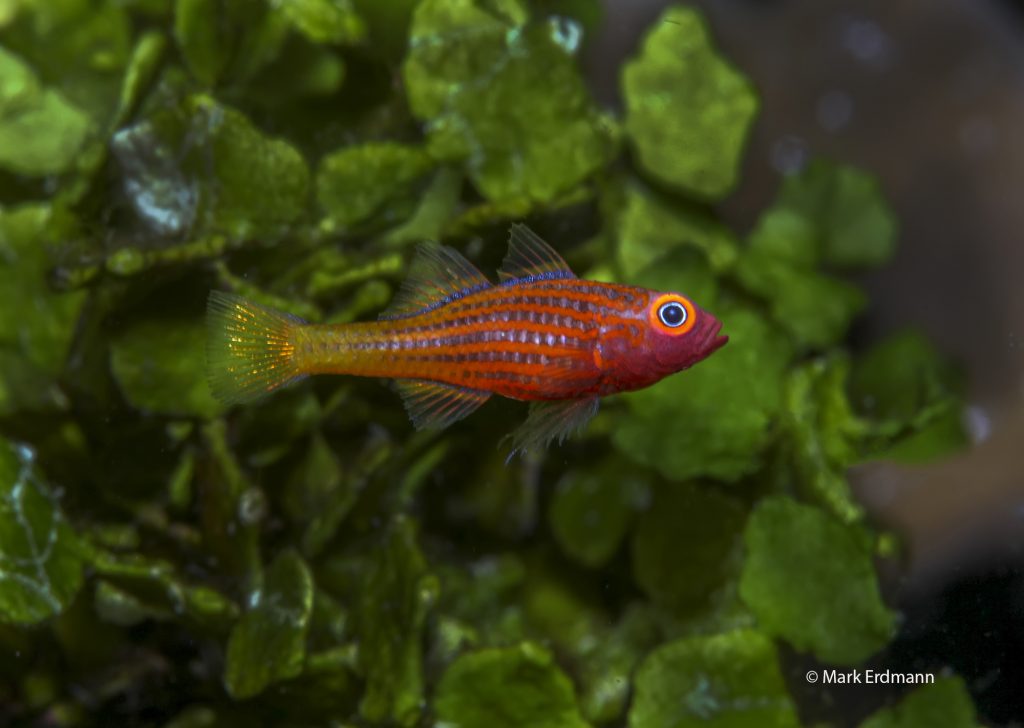 It’s hard to believe that a fish as unmistakable as the Pajama Pygmygoby (Trimma pajama) could go unnoticed until just a couple years ago. Aside from the obviousness of its bright red stripes, it also occurs across a broad swath of the West Pacific, and it seems to favor relatively shallow waters (<10m), particularly in places where Halimeda is around. How did we miss this attractive little fish for so long? 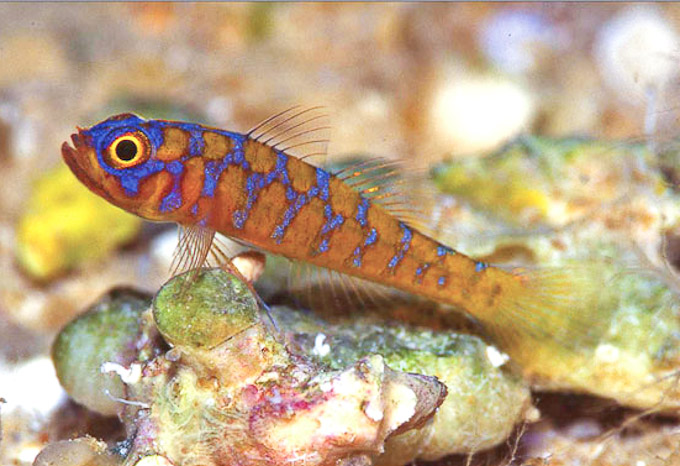 The Meander Pygmygoby (Trimma maiandros) is named for Maiandros, the god of the Meander River in Turkey, famed for its winding course (and from whence the English word originates). The allusion here is to the heavily reticulated blue coloration which separates the numerous spots of this little goby, bringing to mind the bends of a slow, meandering river. This one is reported from across the West Pacific and in a variety of habitats and depths (1-55m), but it’s said to favor outer barrier reefs. 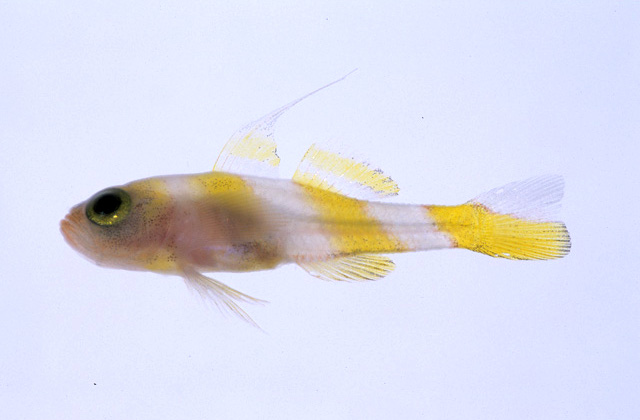 Here’s another undescribed species which was recovered from Okinawa at a depth of 269 meters, which (assuming this is correctly identified as belonging to Trimma) seems to be the deepest this group has ever been found. The slanted yellow bands are spectacular even in death, and, no doubt, it must be even nicer to look at while still alive. 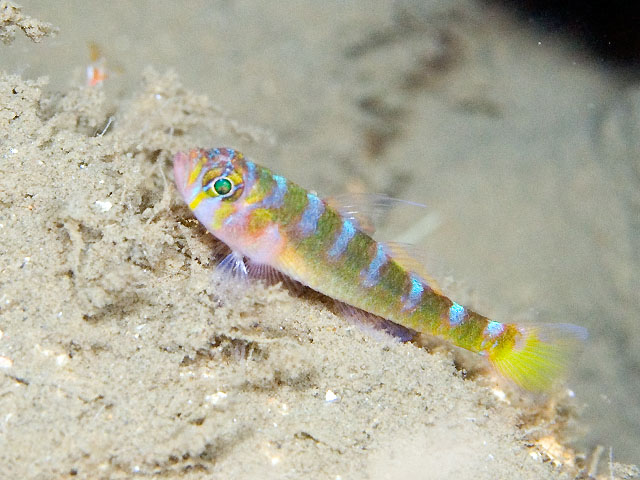 There’s a subtle beauty to Yanagita’s Pygmygoby (Trimma yanagitai) that reminds me a bit of the Chalk Basslet (Serranus tortugarum). When the light refracts at just the right angle, the thin blue stripes along the back practically glow. This is a Japanese species known from moderately deep (30-50m) habitats, often in areas where silt is present.

Lastly, I would be remiss if I failed to include one of the most popular members of this group in the aquarium trade, the Bluestripe Pygmygoby (Trimma tevegae). However, this isn’t quite accurate, as a recent revision to that species revealed there to be a handful of highly similar species which have long been confused for one another. As it turns out, the true Trimma tevegae is a fairly uncommonly encountered species which has likely never been collected for the aquarium trade. The little upsidedown-swimming goby that we know and love is actually Holleman’s Pygmygoby (T. hollemani), though the Blotch-tailed Pygmygoby (T. caudomaculatum), seen in the video above, is also occasionally represented.