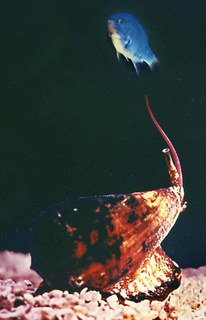 
Scientists have long known that cone snail venom has a great potential for drug discovery. The individual components of cone snail venom, known as conopeptides, are the primary target for drug manufacturers due to their unique properties. One of the first commercial cone snail conopeptides brought to market as a drug is Ziconotid, a powerful anti-pain medication derived from the Conus magus cone snail.

Recently, scientists isolated a conopeptide from the Conus striatus cone snail called Conkunitzin-S1 that alters how the pancreas releases insulin. This compound was found to have significant potential for treating type 2 diabetes.  Their findings are reported in the magazine EMBO Molecular Medicine.

Type 2 diabetes is the most common form of diabetes making up 90% of the cases diagnosed each year in adults. The disease is characterized by high blood sugar levels and the body’s lack of ability to respond to sugar properly for normal daily activities. It is a serious disease affecting 285 million people in 2010.

“This potentially could be a new approach to the treatment of type 2 diabetes”, says Professor Heinrich Terlau from the Physiological Institute of Kiel University and associate member of the Excellence Cluster “Future Ocean”. “The action of some substances that are ordinarily used in the treatment of type 2 diabetes is independent of the blood glucose level”, Terlau describes. This can lead to low blood glucose, also known as hypoglycaemia. “What is new about this substance is that it has a very specific effect. Because of this fact, the likelyhood of side effects such as hypoglycaemia is minimal”, Terlau continues.

The newly discovered substance, conopeptide Conkunitzin-S1, binds to a specific potassium channel in the pancreas cells and leads to a temporarily increased release of insulin but only if the blood sugar level is raised.

Trials with rats look promising and the next step is to see if the compound can be administered orally.